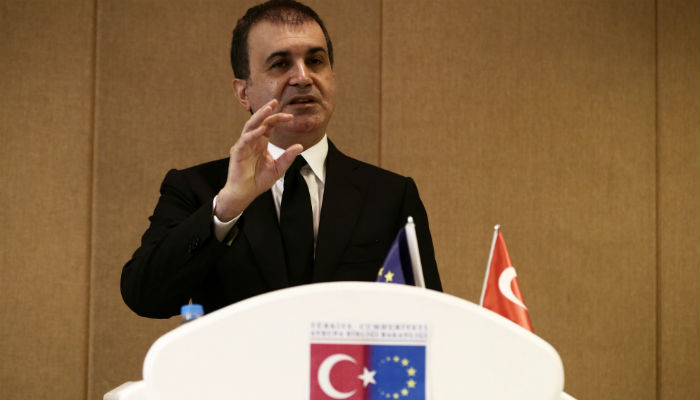 Turkey’s EU Affairs minister has described a vote by the European Parliament (EP) in favor of freezing accession talks with Turkey as “null and void.”

“We deem the decision null and void. If it had been critical or constructive, we would respect it, but this decision of the EP includes political inconsistencies,” Çelik said in his first reaction to the EP vote.

A total of 479 deputies voted in favor of imposing a “temporary freeze” on the talks with Turkey while 37 deputies voted against the non-binding resolution in a vote held in Strasbourg in Thursday.

Çelik said the EP members who seek to send Turkey a message with the vote should know that their message will not be able to make its way into Turkey from the Kapıkule border gate.

“This is a message which we can never heed,” he said.

Some EP members said on Thursday that the vote was caused by the lack of democracy and the rule of law in Turkey.

In the meantime Turkish Prime Minister Binali Yıldırım said on Thursday that Turkey’s ties with the EU are already “forced relations” and that the EP vote to freeze membership negotiations with Turkey has no importance.
“We expect EU leaders to stand up against this lack of vision,” Yıldırım said of the vote. “The EU should decide whether it wants to continue its future vision with or without Turkey,” he told reporters.

Since a failed military coup attempt on July 15, more than 115,000 people — including soldiers, academics, judges, journalists and Kurdish leaders — have been detained or dismissed over their alleged backing for the putsch, in what opponents, rights groups and some Western allies say is an attempt to crush all dissent.