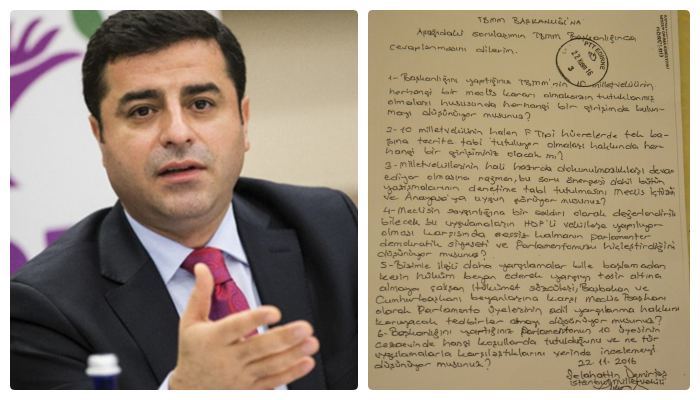 In a question submitted from prison, Co-chair of the Peoples’ Democratic Party (HDP) Selahattin Demirtaş on Tuesday challenged the Turkish Parliament, asking whether they have taken any action regarding the imprisonment of 10 of its deputies.

Emphasizing that 10 HDP deputies who have been under arrest since a crackdown on the Kurdish opposition on Nov. 4 are in solitary confinement, Demirtaş said the arrests took place without any decision by Parliament. Demirtaş also asked the legislative body whether control of correspondence from prison is in compliance with parliamentary bylaws and the constitution.

Demirtaş was arrested on Nov. 4 in Diyarbakır and put in prison in Edirne, cities at opposite ends of the country.

Demirtaş and other the HDP deputies are accused of “terrorist propaganda” and refusing to testify to a prosecutor in a relevant investigation.