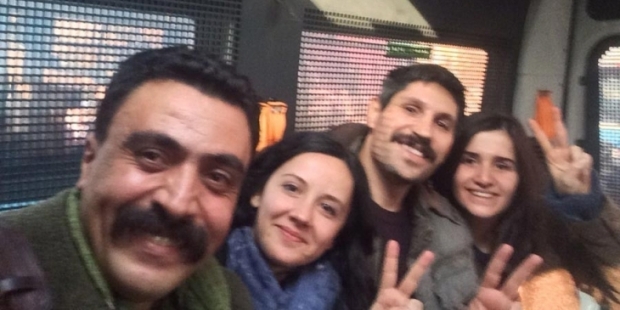 Selçuk Kozağaçlı, president of the now-closed Progressive Lawyers’ Association (ÇHD), was detained in Ankara on Tuesday along with three other lawyers on Monday soon after he talked about acts of torture being committed in Turkey’s prisons. All four detainees were released on Tuesday night.

Kozağaçlı recently came to public attention with his remarks suggesting that people who were jailed as part of an ongoing crackdown on the faith-based Gülen movement are being systematically tortured in prisons in the most barbaric ways including rape, removal of nails and the insertion of objects into their anuses.

“They remove the nails of colleagues [during detention] at police stations. Believe me, I saw people who underwent a colectomy after they were tortured with objects inserted into their anuses in prison and at police stations,” Kozağaçlı said during the Ankara Bar Association’s general assembly on Oct. 16.

Kozağaçlı was detained along with three other lawyers during a police raid on the Halkın Law Office in Ankara.

The ÇHD was among the 370 nongovernmental organizations that were closed down by government decree earlier this month on the grounds that they were linked to terror organizations.

Turkish authorities claim Turkish Islamic scholar Fethullah Gülen, who lives in Pennsylvania and whose views inspired the Gülen movement, was the mastermind of a violent coup attempt on July 15 that killed over 240 people and injured a thousand others, while Gülen strongly denies any involvement.

With previous decrees, which have the force of law, the government has closed down more than a thousand schools, foundations and other organizations that have alleged links to the Gülen movement.

As part of the crackdown on the movement, more than 110,000 people have been purged from state bodies, in excess of 80,000 detained and over 36,000 have been arrested since the coup attempt. Arrestees include journalists, judges, prosecutors, police and military officers, academics, governors and even a comedian. Critics argue that lists of Gülen sympathizers were drawn up prior to the coup attempt.