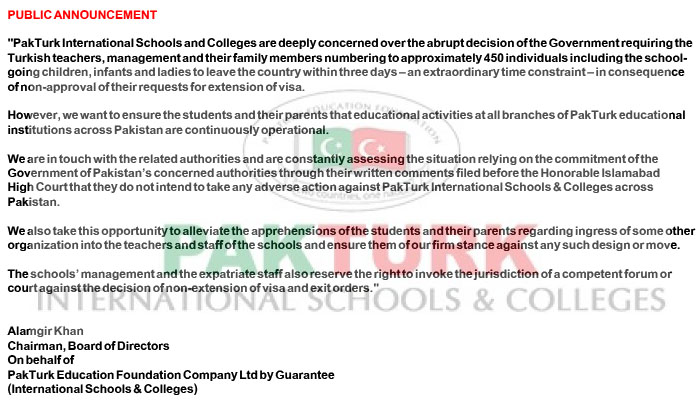 Ahead of a visit by Turkish President Recep Tayyip Erdoğan to Pakistan, the Pakistani government has asked teachers who work at 23 schools affiliated with the faith-based Gülen movement in the country to leave Pakistan by Nov. 20.

A total of 108 teachers are working at Gülen-affiliated schools in Pakistan, which operate under the name of PakTurk International Schools and Colleges. They have been asked to leave the country with their families, numbering 450 people in total.

The decision of the Pakistani government was announced by the country’s Interior Minister Chaudhry Nisar Ali Khan during a live TV program.

The announcement came one day before a two-day visit by Erdoğan to Pakistan begins on Wednesday. Erdoğan will address a joint session of the Pakistani parliament, which will be his third such address since 2009.

PakTurk International Schools and Colleges posted a statement on its website on Tuesday voicing concerns about the decision of the Pakistani government with regard to the Turkish teachers working at these schools in Pakistan.

“PakTurk International Schools and Colleges are deeply concerned over the abrupt decision of the Government requiring the Turkish teachers, management and their family members numbering to approximately 450 individuals including the school-going children, infants and ladies to leave the country within three days – an extraordinary time constraint – in consequence of non-approval of their requests for extension of visa,” said the statement.

The statement also noted that the management of Pak-Turk International Schools and Colleges is in touch with the relevant authorities and is constantly assessing the situation, relying on the commitment of the government of Pakistan’s concerned authorities through their written comments filed before the honorable Islamabad High Court that they do not intend to take any adverse action against PakTurk International Schools and Colleges across Pakistan.

“We also take this opportunity to alleviate the apprehensions of the students and their parents regarding ingress of some other organization into the teachers and staff of the schools and ensure them of our firm stance against any such design or move. The schools’ management and the expatriate staff also reserve the right to invoke the jurisdiction of a competent forum or court against the decision of non-extension of visa and exit orders,” added the statement.

Ankara had asked Pakistan in August to close down institutions run by Fethullah Gülen, a US-based cleric accused of masterminding and backing a botched coup attempt in Turkey. Gülen, whose views inspired the Gülen movement, which runs a network of schools, charity organizations and foundations around the world, strongly denies any involvement in the coup attempt.

In Pakistan, the Gülen movement runs a network of schools and the Rumi Forum, an intellectual and intercultural dialogue platform, in addition to having business stakes. Gülen-linked organizations and businesses have been operating in Pakistan for decades.
Since the eruption of a corruption investigation in late 2013 in which senior members of the Turkish government were involved, Erdoğan has been waging an all-out war against the movement. All Gülen-linked schools, organizations and foundations were closed down in Turkey after the coup attempt on July 15. Erdoğan is also exerting pressure on other countries to close down Gülen schools operating in those places.