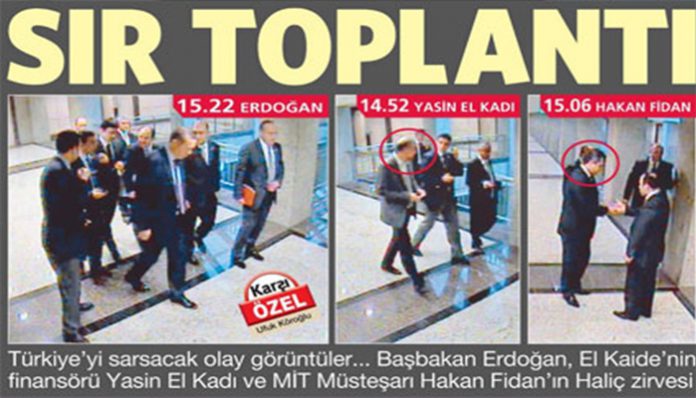 The economic and financial policy decisions in Turkey are made by the corrupt multi-billionaire President Recep Tayyip Erdoğan and his family members, who use public institutions as vehicles for maximizing profits and reaping millions of dollars from government transactions, contracts and tenders through regime benefactors.

For that, the Erdoğan family taps crooked political cronies who are brought into key positions in the financial and economic management of the Turkish government after they prove their worth through work in their patron’s illicit and illegal operations. They are later linked up with business associates who pay up to the royal family with kickbacks on commissions and other perks. The result is that it is simply no longer possible to conduct normal commercial operations in Turkey without making significant payoffs to Erdoğan’s family members and their associates.

Both Iran and Saudi Arabia have used this weakness on the part of Erdoğan to infiltrate the Turkish government, influence foreign policy decisions, manipulate public institutions and create cover for their operatives who have apparently broken multiple Turkish laws and acted against the interests of Turkey’s long-time friends in the transatlantic alliance. Iranian Reza Zarrab, a sanction-buster who bribed cabinet ministers, donated huge sums to foundations run by the Erdoğan family and was able to divert billions of dollars back to Iran through Turkish banks, which aided and abetted in the financing of terror by the Iranian Revolutionary Guard Corps.

Likewise, Yasin Al-Qadi, a one-time alleged al-Qaeda financier who was on the US and UN lists as a supporter of terrorism, was intimately involved with Erdoğan’s family in multi-billion dollar schemes. His secret meetings with Erdoğan, his son Bilal, and Turkish intelligence chief Hakan Fidan while he was under a travel ban by a UN resolution as well as Turkish laws likely resulted in clandestine operations in the financing of armed struggle in foreign countries. The leaked emails of Berat Albayrak, Erdoğan’s son-in-law and now energy minister, confirms what we already know on how this patronage system works. Thanks to these leaks, we now have a clearer picture of key culprits in the corrupt system and their modus operandi and interests.

Let’s start with Turkish Central Bank Governor Murat Çetinkaya, who came to this position at the relatively young age of 40 after serving on the seven-member Monetary Policy Committee. He was made deputy governor in 2012 after a special amendment to the law was pushed through Parliament enabling his university major (political science and international affairs) to be included in eligibility criteria for that position. It was clear even then that he was groomed by Erdoğan for this position.

He is an insider for the Erdoğan family at the heart of the financial system in Turkey, passing all the information on what is happening in the central bank to Erdoğan’s son-in-law Berat, who did not even have an official position in the government back then. A survey of dozens of email exchanges between Çetinkaya and Albayrak reveals that the deputy bank governor was acting like a snitch in the bank by sharing sensitive and confidential information with Erdoğan’s family. In one email dated Aug. 27, 2014, a day before the central bank convened Monetary Policy Committee to decide on interest rates, Albayrak asked Çetinkaya to present a clear position and told him that he was awaiting positive news from the bank. Çetinkaya affirms his position, stressing that he and his team will have a strong position in the meeting. In a normal democratic country, both these men would have been charged, tried and convicted on several counts of criminal offenses. Since there is no longer a rule of law, and no independent judiciary, nobody would dare touch Erdoğan’s henchmen. Another email dated Oct. 13, 2013, shows Çetinkaya also divulged confidential notes about International Monetary Fund (IMF) and World Bank meetings with Albayrak.

The second key operative for the Erdoğan family is Mehmet Muş, who is now deputy chairman of the parliamentary group of the ruling Justice and Development Party (AKP). He served as deputy chairman of the AKP responsible for economic policies. Muş has worked closely with Albayrak on economic and financial matters and helped Albayrak undermine the one-time economy czar of the Turkish government, Ali Babacan, by working behind the minister’s back. For example, on Feb. 20, 2015, Muş alerted Albayrak that a draft bill on insurance would soon be submitted to Parliament to facilitate insurance giant Lloyd’s entry into the Turkish market. Babacan was hoping that with these changes, Istanbul would have a better chance of becoming a financial hub and that Lloyd’s could have improved that prospect. The draft bill, although it was cleared in the Planning and Budget Commission on March 16, 2015, despite opposition from its chairman, Recai Berber, who was lobbied by Albayrak, was later killed on the floor on March 25, when Erdoğan loyalists submitted a last minute motion to drop the changes. The government representative did not object and the amendment was withdrawn.

The third operative is Naci Ağbal, currently finance minister and another key member of Erdoğan’s financial and economic team. He was the undersecretary to former Finance Minister Mehmet Şimşek, who, as everybody in business circles knows, is nothing but a poster boy and has no real pull in the government other than running from one assignment to another for speech engagements. Erdoğan often bypassed Şimşek and directed his clandestine operations using Ağbal as the culprit when he was just a bureaucrat. The auditing and levying of financial penalties for businesses owned by Erdoğan’s opponents and critics while writing off the unpaid back taxes for pro-Erdoğan businesspeople carries the signature of this Ağbal guy. He also used the Finance Ministry’s Financial Crimes Investigation Board (MASAK) — an economic intelligence unit that coordinates with intergovernmental watchdogs such as the Financial Action Task Force (FATF) and the Egmont Group in the global fight against money laundering and the financing of terrorism – to bring forward trumped-up terror charges against critical and independent media outlets and other businesses so that they could be seized and turned over to loyalists as war spoils for Erdoğan.

Ağbal often interacted with Albayrak in several key financial matters, sharing draft bills with him in advance so that necessary changes could be made to have Erdoğan family members and associates benefit the most or stand clear of possible negative repercussions. The Erdoğan family empire has multi-billion-dollar business interests in so many places, some under the name of caretakers, in Turkey and abroad to not draw much attention, while others are stashed in various capital instruments. As a result they are concerned about any change that may risk these assets.

For example, from email exchanges with Ağbal, Erdoğan’s son-in-law was seen as intimately involved in the Turkish government’s belated move to conclude an agreement with Washington to help the US’s efforts to address tax evasion for its own citizens as part of the US Foreign Account Tax Compliance Act (FATCA), which was approved in March 2010. FATCA requires banks outside the US to give Washington details of foreign accounts held by US citizens or permanent residents. Non-compliant institutions could be frozen out of US markets, dealing a potentially lethal blow to foreign economies, including Turkey. The US started lobbying Turkish leaders to convince them to comply with FATCA requirements, and the negotiations were conducted between the US Internal Revenue Service (IRS) and the Turkish Finance Ministry. The talks lingered on despite the fact that FATCA became effective on July 1, 2014. Only a month after the deadline, Turkey reached a deal with the US in principle, although the official intergovernmental agreement was not signed until July 2015. The agreement was finally published in the Official Gazette on March 16, 2016, after an ultimatum by the US to leave the Turkish banking industry out in the cold.

Perhaps the best example how Ağbal and Albayrak worked in conspiring against taxpayers was the joint work they did in reformulating a draft bill to grant amnesty for tax evaders and give money launderers a free ride. The bill, drafted at the Revenue Administration, was shared with Albayrak starting from June 17 of this year. In one exchange, Albayrak was seen chiding the minister for changes that were made by finance officials but not approved by him. The bill was ostensibly aimed at restructuring debts, but an amendment that was added to the bill effectively gave amnesty to money launderers and tax evaders. For example, Article 7 of the bill offered blanket immunity for those who bring their assets to Turkey with no questions asked. Undeclared gold, cash, foreign currency, all sorts of capital instruments as well as ships and yachts can be repatriated to Turkey under the bill. It said those who do so will not face any prosecution, investigation or auditing at all.

This bill was rushed to Parliament on July 22 using the post-July 15 failed coup noise as a smokescreen. It moved through the Planning and Budget Commission at lightning speed four days later. The General Assembly adopted the bill including Article 7 on Aug. 3, making it a law. It was amazing speed given the backlog of bills pending in Parliament in both commissions and the plenary. These changes mean gross violations of Turkey’s commitments under FATF as well as G20 principles on the prevention of money laundering; yet, the Erdoğan family needed this bill to move some of their assets back to Turkey. It is worth recalling that a similar provision, buried in an omnibus bill, had to be dropped because of outrage by the opposition in Parliament. This time, with the exception of one lawmaker, nobody objected to the bill in the Turkish Parliament. Perhaps that is why Erdoğan called the failed coup attempt a “blessing from the God.”

I will continue writing more about other key operatives in Erdoğan’s circle of trust in the management of economic and financial matters including the reasons why Binali Yıldırım was chosen as caretaker prime minister, and how his chief economic advisor Yiğit Bulut continues to keep his position despite so many public blunders