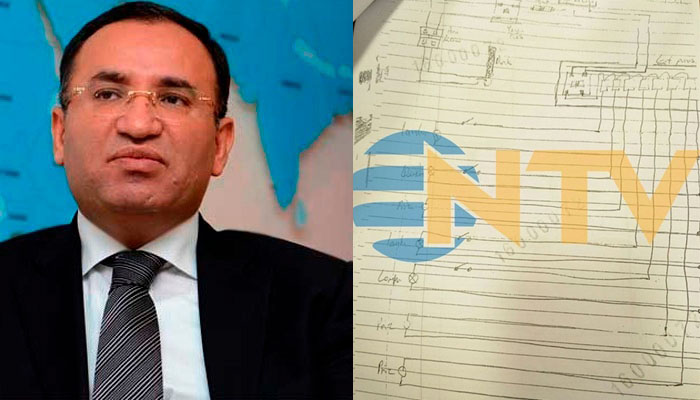 Turkey’s Justice Minister Bekir Bozdağ has rejected claims by a pro-government news channel that jailed members of the faith-based Gülen movement, which the government accuses of masterminding a failed coup on July 15, were planning to break out of prison, accompanied by a prison break map that turned out to be a sketch of electrical circuitry.

Despite the fact that NTV’s story was considered scandalous by many social media users for endangering lives of hundreds of people in prison, Bozdağ said in Ankara on Friday that he believes the sketches were publicized in order to motivate prisoners who are on the verge of a psychological breakdown to remain strong.

“They cannot succeed with such a [escape] plan. But I believe those sketches were [publicized] for the purpose of motivation,” he said.

The story that NTV, owned by Doğuş Holding, called a special report bears the title “The collective prison break of FETÖ revealed,” accompanied by a photo of an alleged escape plan that was in fact a drawing of electrical circuitry.

The government coined the term “FETÖ” to label the Gülen movement as a terrorist organization, and the term is abundantly used by almost all media outlets in Turkey despite the lack of any court verdict proving the existence of such an organization.

Ömer Turanlı, a lawyer representing a former police chief imprisoned as part of a crackdown against the movement, claimed last week that the Turkish government is headed for mass killings of people jailed over alleged or real links to the Gülen movement, in a staged riot in Silivri Prison.

“According to unconfirmed information my clients received from their families, officials will open the gates [of holding cells] in order for prisoners to escape as if in a prison break. And then soldiers will be ordered to shoot them,” lawyer Ömer Turanlı tweeted.

Since the failed coup on July 15, as part of a massive purge Turkey has arrested tens of thousands of citizens for their alleged ties to the Gülen movement based on guilt by association only. Following the arrests, the pro-government media has been running stories of possible uprisings in prisons although not a single act of resistance against detentions or arrests has taken place. Such stories raise concerns of mass killings of inmates in an effort to exterminate Gülen movement followers in prisons as the final step of the massive purge.