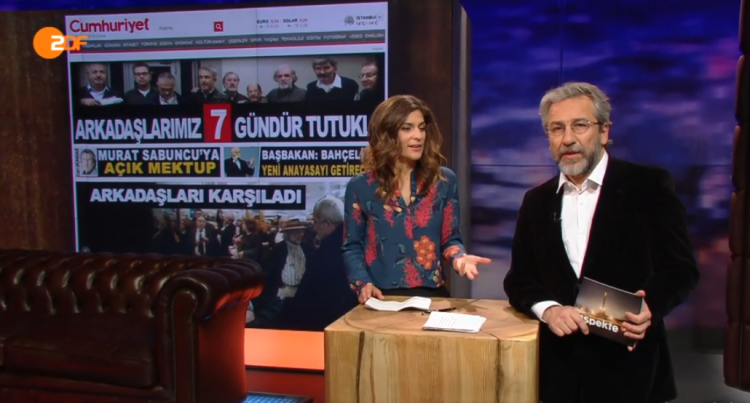 The former editor-in-chief of the Cumhuriyet daily, Can Dündar, co-hosted a German TV show on Friday and called on Europeans to show solidarity with imprisoned journalists in Turkey.

Appearing on ZDF’s “Aspekte,” the exiled journalist Dündar, who was also imprisoned due to his reporting of arms bound for Syria, sent by Turkish intelligence, urged Europeans to push politicians to take action for journalists in jail. Currently, 144 journalists are incarcerated in Turkey, although the number varies since TRT journalists who are also public servants are not included in this figure.

Dündar called on viewers to write to jailed journalists as he read letters from imprisoned authors Aslı Erdoğan and Ahmet Altan on the show.

Dündar said he would not be able to appear on such a show in Turkey given the enormous pressure on freedom of expression.

Using the failed coup attempt of July 15 as an excuse, President Recep Tayyip Erdoğan has been undertaking a massive purge mainly against the Gülen movement and other critics of the government. In addition to 144 journalists, thousands of judges, prosecutors, academics and civil society representatives are under arrest.