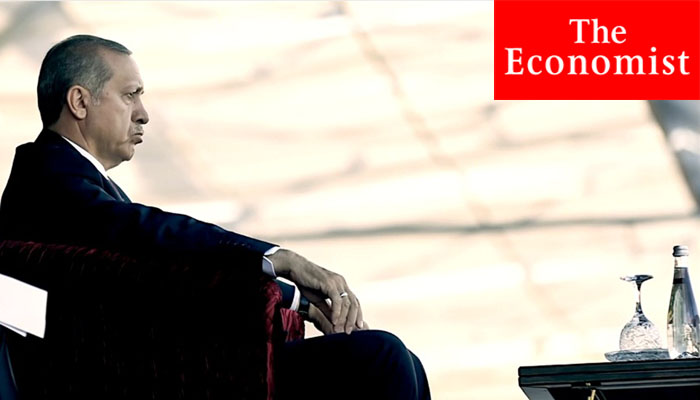 The London-based Economist weekly news magazine described the executive presidential model that Turkey’s President Recep Tayyip Erdoğan wants to switch to as more similar to the Kazakh and Russian models than to France or the United States.

In an article published on its website on Thursday night, The Economist said that Turkey’s Erdoğan keeps purging dissidents while the world is focused on the US presidential election.

According to the magazine, pro-Kurdish Peoples’ Democratic Party (HDP) deputies, 10 of whom the government recently arrested over links to the outlawed Kurdistan Workers’ Party (PKK), are the latest casualty of the snowballing purges ordered by Turkey’s President Erdoğan following the arrest of more than 36,000 people and the sacking of in excess of 100,000 from state jobs over links to the Gülen movement, which Erdoğan accuses of plotting a failed coup attempt in Turkey on July 15.

The Gülen movement, popularly known as the Hizmet movement — a civil society initiative inspired by the views of US-based Turkish Islamic scholar Fethullah Gülen promoting worldwide interfaith dialogue, peace and tolerance — is facing an intensive government witch-hunt, especially after a failed coup attempt in Turkey on July 15. A large number of schools, educational institutions and companies have been seized due to their alleged links to the movement, as the Justice and Development Party (AKP) government and President Erdoğan accuse it of being behind the coup attempt. Erdoğan also accuses sympathizers of the Gülen movement in the state bureaucracy of having launched a graft investigation in December 2013 that exposed the government’s involvement in corruption.

Gülen and his sympathizers have continuously denied Erdoğan’s accusations since no concrete evidence of any crime has ever been brought before a court. Erdoğan even rejected a proposal by Gülen to form an international committee to investigate July’s failed coup in Turkey in order to ascertain the perpetrators. Tens of thousands of people including bureaucrats, military officers, journalists and civilians have been purged by the AKP government since the 2013 corruption investigation, an operation that has gained speed since the July 15 coup attempt.

What follows is the full text of The Economist article, titled “While you were watching Trump… Turkey locks up dissidents”:

“THE police in Diyarbakir came for Ziya Pir and his colleagues from Turkey’s pro-Kurdish Peoples’ Democratic Party (HDP) on November 4th, in the black of night. Detained on vague terrorism charges, they were taken to a police station; Mr Pir and several others were then transferred to a courthouse. As dawn broke, a car bomb went off outside the police station, killing 11 people, mostly civilians. An offshoot of the outlawed Kurdistan Workers’ Party (PKK) took credit. The attackers “must have known that there were people being detained inside the building,” says Mr Pir. He and his colleagues narrowly escaped death at the hands of a group they are accused of supporting.

“The HDP is the latest casualty of the snowballing purges ordered by Turkey’s president, Recep Tayyip Erdogan, in the aftermath of the failed coup on July 15th. Over 36,000 people have been arrested and 100,000 sacked, most of them from state jobs. Mr Erdogan has imposed emergency rule and put Turkish politics in a stranglehold. Ten HDP deputies, including its co-chairs Figen Yuksekdag and Selahattin Demirtas, a former candidate for president, have been arrested. Police have raided the party’s Ankara headquarters. The HDP responded with a partial boycott of parliament.

“Mr Erdogan is backed by a coalition of nationalists and Islamists, fired up by the summer’s violence and by his own rhetoric. (To him, this coalition is synonymous with “the national will”.) Politicians from the ruling Justice and Development (AK) party accuse Western critics of ignoring the trauma of the attempted coup on July 15th, which left some 270 people dead. They argue that if the junta, thought to answer to the widely reviled Gulenist sect, had wrested power from Mr Erdogan, it could have meant civil war.

“Yet the damage inflicted on Turkish democracy by the purges has been appalling. Having locked up the HDP leadership, as well as more than 100 journalists, the government has begun to turn up the heat on the main opposition, the secular Republican People’s Party (CHP). Earlier this week, the party denounced the arrests of the Kurdish lawmakers, calling on its own supporters to “resist democratically”. Mr Erdogan responded by lodging a criminal complaint against all of its MPs. Under emergency law, parliament has turned into a sideshow. To the dismay of AK’s own dwindling moderate faction, Mr Erdogan is once again musing about reinstating capital punishment. A nationalist party wants the death penalty, and analysts fear that Mr Erdogan may back it if the nationalists support a new constitution that would give him further executive powers.

“In theory, Turks will have their say on the constitutional changes in a referendum planned for the first half of 2017. Yet with the mainstream media cowed or co-opted, Kurdish politicians behind bars and dissent equated with treason, the prospect of a free and fair vote is abysmally low. A referendum held under the state of emergency, up for renewal in January, risks turning into a coronation.

“As models for his executive presidency, Mr Erdogan’s supporters cite France and America. Yet the more relevant models are Kazakhstan and Russia, with an added serving of political Islam. Mr Erdogan’s inner circle sees Turkey as “a more nonaligned country, with no dues to pay, no burden to carry, and no club membership,” says Yusuf Muftuoglu, a former presidential adviser. The question is how much further Turkey can go along the path to autocracy without provoking serious unrest.

“Mr Erdogan may be tempted to push ahead with a complete purge of the opposition, says Ali Bayramoglu, a veteran commentator. But even with the backing of the Islamist and nationalist camps, that would be no walk in the park. In a society as polarised and diverse as Turkey’s, the transition to absolute rule risks opening the door to social unrest. “Erdogan is a tactician; sometimes he knows very well when to stop,” says a former CHP politician. While there may be more episodes of repression, “this cannot go on indefinitely.”

“If fear of civil unrest does not keep Mr Erdogan up at night, the sagging economy may. The government recently revised its 2016 growth forecast down to 3.2% from 4.5%. The lira has fallen to its lowest level against the dollar in over three decades. Unlike the autocratic regimes to its east, Turkey relies on credit, not oil or gas, to generate growth. “This country needs to attract money from abroad, to continue giving the image that it knows where it’s going,” says an economist. Further repression, and the ensuing instability, “cannot be sustainable”.

“Yet governments often do things that are not economically sustainable. Turkey’s democracy is on life support. Mr Erdogan is holding the plug.”