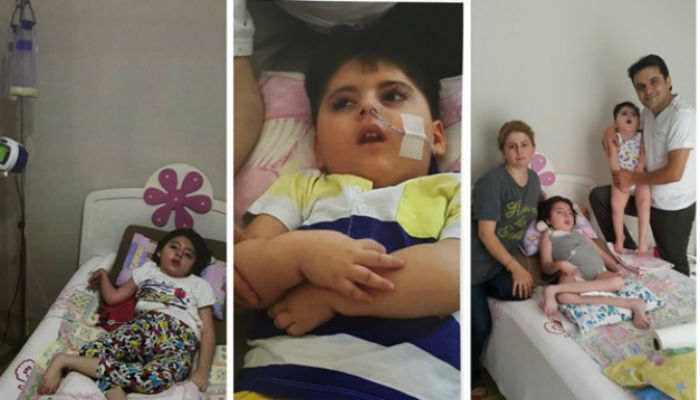 Hacer Çakmak, the mother of three children, two of them disabled, and the wife of a Turkish judge who is currently under arrest, sent a short letter to Turkey Purge, saying that Turkish government seized money granted for her disabled children by Turkey’s Social Security Institution.

Çakmak revealed in her letter that she was left to fend for herself along with her two handicapped children and a 72-year-old mother who can’t even walk, after her husband was arrested 105 days ago.

Here is the full text of the letter submitted by Mrs. Çakmak:

“I have two disabled children and the Turkish state grants money for them. I provide the bills of expenditure of my children to the Social Security Institution and they cover the expenditures. Authorities from the institution called me a couple of days ago and let me know that they had deposited the money for this month. I went to the bank to withdraw the money, but I was told that the money was deposited to my husband’s bank account. All of his accounts are frozen because he is in prison. Therefore, they told me I was not allowed to withdraw that money. In other words, the state seized my children’s money.”

Çakmak is among hundreds of thousands of people who found themselves facing tremendous difficulties after the government started a desperate crackdown on the Gülen movement in the aftermath of a July 15 coup attempt. This is the second letter sent to Turkey Purge by Çakmak this week.

“… My husband, Seyfullah Çakmak, a judge who was arrested on 17/7/2016, has been in Kocaeli Prison for 105 days and has been alone in a cell for 45 days. He is allowed to go out to the open area to exercise without seeing any other prisoners.

“We have three children. Two of them, who are disabled, desperately need our help to survive. My husband was dismissed, and I am a housewife. I do not have any income. We do not have any property to sell. I have a only a car for my disabled children.

“We have regularly visited the hospital for 18 years during our marriage. We had tried in vitro fertilization five times to have a baby. The last one was successful, we had twins, but one unfortunately one died nine days later. The sixth attempt also failed. I gave birth to a girl on 29/9/2007 from my seventh in vitro fertilization. My daughter, Tuğba, has a genetic disease called nonketotic hyperglycinemia. She is nine years old and fully needs of our support to live. She cannot move, she has to be fed.

“I gave birth to a healthy girl on 23/03/2009. Her name is Tuğçe Seher. In 2013, during my pregnancy, between September 2013 and January 2014, I had to stay in a hospital. I delivered a son who was suffering from birth defects. His name is Ömer Seyfettin. [For the first month after he was born, I was confined to the hospital.] My husband took care of the children by himself. My husband always helped me care for our kids until he was arrested. I can’t carry my daughter around or give her a bath. Can anyone tell me what I should do?

“My husband devoted his life to us and to his job. We spend at least 40 to 60 days in the hospital every year, in addition 40 to 60 visits to the hospital. My husband is such a hard-working person. He is also a very successful member of the judiciary. He has always been appreciated by his colleagues.

“My husband was arrested and charged with being a member of an armed terrorist organization and [attempting to destroy] the constitutional order. My husband has no connection to any illegal organization. Our entire life consists of our home, the hospital and our children. There is no evidence in the case.

“He is such a successful lawyer, a good husband and a wonderful father. He has not been assigned to any special court. He has exerted the utmost effort in terms of performing in his work. He always observed the constitution and the principles of judicial ethics while he worked. He has never accepted any orders from inside the judiciary or from outside it. That’s why he was targeted, dismissed and arrested.

“My mother is sick. She is 72 years old and can’t walk. My dad, who is 79, takes care of my mom. My mother-in-law and father-in-law have passed away. There is no one who can help me take care of my kids.

“Arresting my husband is not only punishment for him but for our whole family as well. There is no one to hear our voices. Judges and prosecutors are under severe pressure and profiled as members of FETÖ. Therefore, they cannot perform their jobs based on legal evidence. They say, ‘Sorry, we cannot do anything.’ Although he has not received any disciplinary punishment, he was jailed in a cell. He has stayed there alone for 37 days.

“I am so desperate with two disabled children, and I do not know what should I do. I kindly ask your help in monitoring this unlawful persecution.”