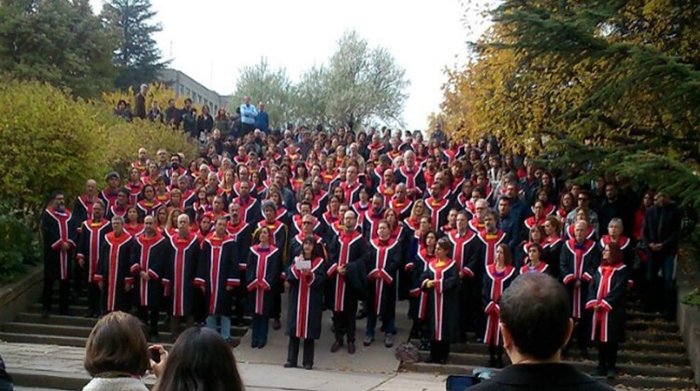 The academics wore their robes and met on the university campus in protest of a government decree that went into effect on Oct. 29 and among other things cancelled rector elections at universities. According to the decree, university rectors will be directly appointed by the president.

Releasing a statement during the protest, the academics said: “The prerequisite for universities to produce knowledge for the well-being of societies and contribute to social development is autonomy. So, the autonomy of universities is taken under guarantee in modern countries. Asking for the election of university rectors is not seeking privilege on the part of the academics.”

Last week, academics from one of Turkey’s most prestigious universities, Boğaziçi University in İstanbul, also slammed the government decree cancelling university elections because it eliminates the autonomy of universities, calling on the Justice and Development Party (AKP) government to annul the controversial decree.

According to the former system in Turkey, universities held elections within their institutions, but the ultimate decision lay with the president. Erdoğan insisted that the abolition of the election system would be beneficial for the country.

In a previous proposal by the governing party in Parliament, a similar change to what Erdoğan proposed was debated in the legislature but failed due to the objection of opposition parties.

A state of emergency declared in the aftermath of a failed coup attempt allows the government to issue such controversial decrees, which bypass Parliament.