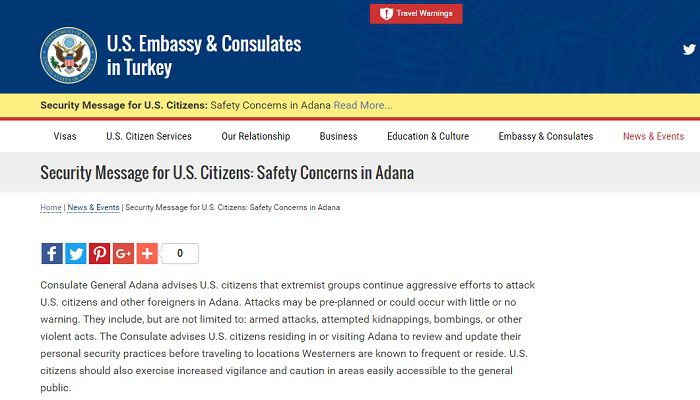 A day after terrorist Islamic State in Iraq and the Levant (ISIL) leader Abu Bakr al-Baghdadi called on his followers to carry out attacks in Turkey and Saudi Arabia, the US Consulate in Adana issued a security warning for US citizens residing in or visiting Adana and suggested caution in the face of possible violence or attacks.

In a statement on Thursday, the US Consulate in Adana advised citizens that extremist groups were continuing aggressive efforts to attack US citizens and other foreigners in Adana.

“Attacks may be pre-planned or could occur with little or no warning. They include, but are not limited to: armed attacks, attempted kidnappings, bombings, or other violent acts. The Consulate advises U.S. citizens residing in or visiting Adana to review and update their personal security practices before traveling to locations Westerners are known to frequent or reside. U.S. citizens should also exercise increased vigilance and caution in areas easily accessible to the general public,” the statement said.

On Oct. 29, the US State Department ordered family members of staff in its İstanbul Consulate General to leave Turkey due to security threats.

The written statement cited security information indicating the continuous efforts of extremist groups to attack US citizens in areas of İstanbul where they reside or frequent.

The security warning by the US authorities has been circulated widely in social media as a sign of a serious security threat in İstanbul. However, no statements have made by Turkish officials following this alarming warning.