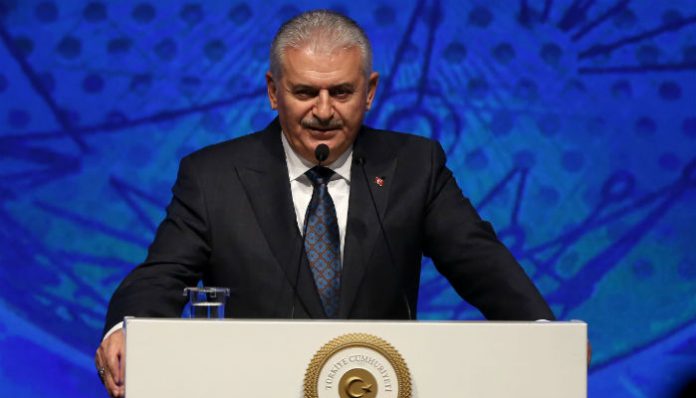 Turkey’s Prime Minister Binali Yıldırım has defended an operation against the country’s second largest opposition party, the pro-Kurdish Peoples’ Democratic Party (HDP), saying that those who engage in terrorism should give an accounting for their actions.

“Those who come [to Parliament] in elections should leave [by losing in] elections, but those engaging in terrorism should give an accounting of their actions],” said Yıldırım on Friday.

Counterterrorism police in the early hours of Friday raided HDP headquarters in Ankara and conducted a search of the premises while 12 deputies, including Co-chairs Figen Yüksekdağ and Selahattin Demirtaş, were detained in police operations in Ankara and the southeastern provinces. One of the deputies was released on probation on Friday morning.

Yıldırım’s remarks came in response to earlier statements from main opposition Republican People’s Party (CHP) leader Kemal Kılıçdaroğlu, who said at a meeting in İzmir province: “If you defend democracy, you should be defending that people who arrive in Parliament in an election should leave by losing in an election [and not other means]. Otherwise, you will kill democracy.”

Yıldırım said all of Turkey’s citizens are equal before the law, adding that the action taken against the HDP is within the limits of the law.

He said local courts summoned 154 deputies whose parliamentary immunity was revoked after Turkey approved a bill in June eliminating the immunity of deputies who face potential prosecution.

Yıldırım said out of the 154 deputies whose immunity was lifted, only HDP deputies, with the exception of one, did not go to court to testify as part of the investigations they face.

“They did not recognize the supremacy of the law. So, the action that has been taken now is connected to their failure to go to court [to testify],” said Yıldırım.

The CHP and the Nationalist Movement Party (MHP) extended their support to the AKP to abolish parliamentary immunity of deputies facing potential prosecution.