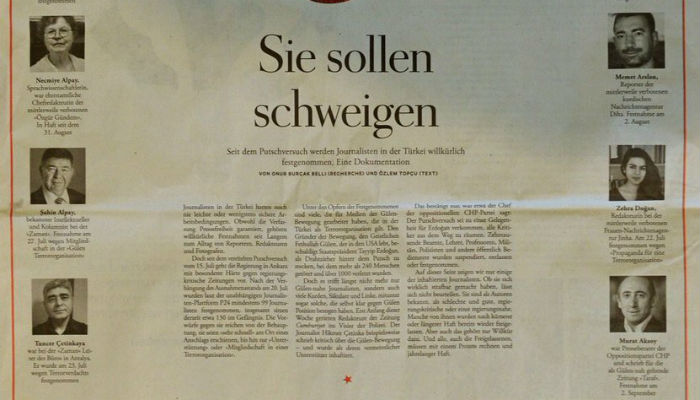 German newspaper Die Zeit on Thursday allocated one of its pages to 29 Turkish journalists who are either currently under arrest or face heavy pressure from the government due to their reporting.

Most of these journalists are under arrest, taken into custody in the aftermath of a failed coup attempt on July 15 on coup charges.

Dozens of media outlets in the country, including Turkey’s best-selling newspaper Zaman, have been closed down and scores of journalists have been jailed by the government since the putsch.

According to a recent report from the Contemporary Journalists Association (ÇDG), 118 media outlets in Turkey were closed down, 184 journalists were detained, 56 journalists arrested, 866 journalists fired from their jobs and 620 journalists had their press cards cancelled during the July-September period.

The Turkish government declared a state of emergency in the aftermath of the failed coup attempt, which has enabled the government to issue decrees having the force of law. The closure of the media outlets has been made through such decrees.