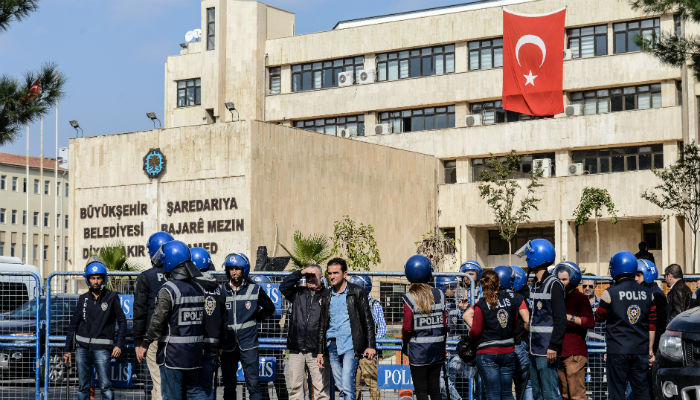 The Justice and Development Party (AKP) is planning to appoint a trustee to the Diyarbakır Municipality, whose co-mayors were arrested on terrorism charges on Sunday, the Doğan news agency reported on Tuesday.

The agency said a deputy governor or a district governor will be appointed to the municipality as trustee by the Interior Ministry in line with a government decree issued earlier.

Diyarbakır Co-mayors Gültan Kışanak and Fırat Anlı were detained on terrorism charges last Tuesday evening in a development that caused outrage and sparked protests in the region. They were arrested on Sunday on the fifth day of their detention.

Kışanak and Anlı are accused of giving speeches in support of the outlawed Kurdistan Workers’ Party (PKK) and of promoting more autonomy for Turkey’s Kurds, according to a statement from the Diyarbakir Chief Public Prosecutor’s Office. They are also accused of transporting the bodies of dead militants in official cars and of sparking violent protests.

Recently, dozens of trustees have been appointed by the Interior Ministry to mostly pro-Kurdish municipalities in Turkey’s Southeast, replacing the elected mayors and municipal council members. The development attracted widespread criticism from the region and Western countries.