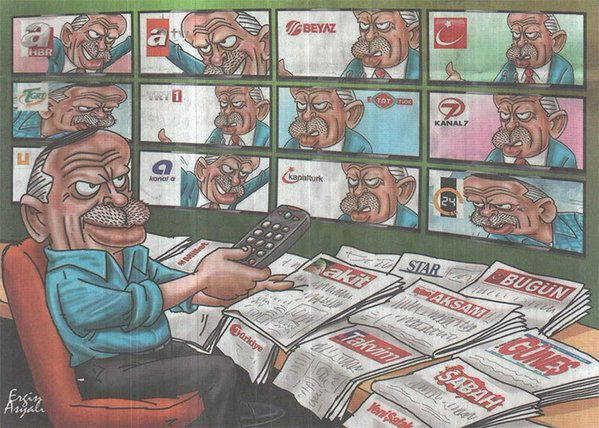 In a report released on Thursday by Reporters Without Borders (RSF) in cooperation with Turkish news portal monitor bianet, government domination of the media is described in detail, with findings including the fact that of the 10 most-watched TV stations in Turkey, seven are owned by people who are affiliated with the government.

The report, part of the Media Ownership Monitor project and subtitled “Government control over Turkish media almost complete,” includes statistics as well as the recent history of the transformation of Turkey’s media ownership during the ruling Justice and Development Party’s (AKP) years in power. The close ties between media owners and politics based on economic interests have also been exposed.

Since the owners of these companies have strong economic interests invested in their ties to the government, they have to ¨keep on good terms with the ruling party,¨ the findings point out.

As far as the creation of a media empire by the government is concerned, the report says that during AKP rule, businessmen close to President Recep Tayyip Erdoğan participated in tenders to buy media outlets “almost without competition.” Furthermore, these businessmen were provided with $750 million by state banks in order to buy the outlets. A parliamentary question of “whether these funds have been paid back to the banks” has not been answered in Parliament based on the claim that it was a “trade secret.”

By 2014, after alleged evidence of corruption within the government was revealed in wiretaps, media outlets known to be affiliated with the Gülen movement were seized by the government. Trustees were appointed to the Koza-İpek Media Group, which owned the Bugün and Millet dailies as well as Kanaltürk TV and Bugün TV; and the Feza Media Group, which owned the Zaman, Today’s Zaman and Meydan dailies, the Cihan news agency and Aksiyon magazine. The trustees shut down the Bugün and Millet newspapers.

In addition, the report mentions that the Kurdish-affiliated IMC TV has either been dropped from the satellite system or prevented from broadcasting. Another major daily, Özgur Gündem, was shut down by the government for allegedly conducting propaganda on behalf of the Kurdistan Workers’ Party (PKK) and acting as the organization’s media organ.

The detailed report also refers to the most serious problem that journalists face in Turkey, namely imprisonment. However, those who are out of prison are experiencing severe unemployment issues. According to the Turkish Journalists’ Association (TGC), the number of unemployed journalists rose to more than 10,000 after the mass shutdown of media outlets following a coup attempt, and one in three journalists in the country is without a job.