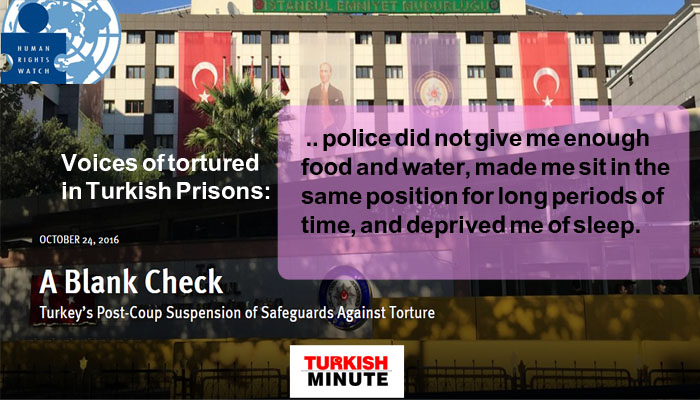 Detained shortly after a failed coup in Turkey, a woman told Human Rights Watch that she was deprived of adequate food and water and that police also turned up the volume of a television in order to prevent her from sleeping while in custody.

What follows is the full text of the tenth abusive incident in the series published by HRW on Tuesday.

“A woman who was detained for three days shortly after the failed coup attempt told Human Rights Watch that during her detention police did not give her enough food and water, made her sit in the same position for long periods of time, and deprived her of sleep.

“After police brought her to the police-station, they placed her in a room with several other women. She said:

‘The police wanted us to sit in the same position all the time, straight up and down on the chair, without talking to each other. If we tried to change position, the guards and police yelled at us, threatening to put us in the detention cells where conditions were much worse. They brought in a walkie-talkie that was making noise all the time and turned the volume of the television all the way up to prevent us from sleeping.’

“The woman told Human Rights Watch that she was given a piece of bread and a small piece of chocolate only towards the evening of the first day of detention. She had been detained shortly after midnight. The woman said that she was not physically abused in other ways.” (Turkey Purge)