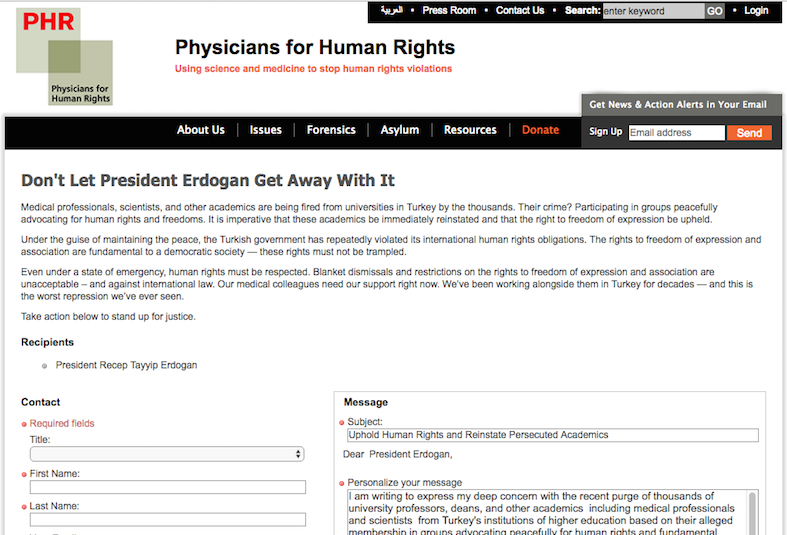 The New York-based Physicians for Human Rights (PHR) has launched a public petition campaign asking people to attempt to dissuade the Turkish government from continuing what it calls “the worst repression we’ve ever seen.”

“Medical professionals, scientists, and other academics are being fired from universities in Turkey by the thousands. Their crime? Participating in groups peacefully advocating for human rights and freedoms. It is imperative that these academics be immediately reinstated and that the right to freedom of expression be upheld,” reads a statement on the PHR website.

“Don’t Let President Erdogan Get Away With It. … Our medical colleagues need our support right now. We’ve been working alongside them in Turkey for decades — and this is the worst repression we’ve ever seen,” the statement said before directing readers to a draft text, shared below, for individual petitions.

“I am writing to express my deep concern with the recent purge of thousands of university professors, deans, and other academics including medical professionals and scientists from Turkey’s institutions of higher education based on their alleged membership in groups advocating peacefully for human rights and fundamental freedoms. These restrictions on academic freedom further compound the consequences of the dismissal of nearly 60,000 government employees in the immediate aftermath of the failed July coup. Any functioning democracy requires a functioning judiciary. Yet Turkey’s courts have virtually ground to a halt after nearly 3,000 judges were dismissed from their jobs overnight for suspected links to the attempted coup, hampering the judiciary’s ability to independently evaluate the potentially arbitrary arrests of nearly 10,000 people and reports of ill-treatment in detention.

“I join Physicians for Human Rights, a human rights organization which for more than 30 years has been engaged in the independent documentation of torture and support for the rule of law, including in Turkey in calling for the protection of human rights in your country. It is in this spirit that I urge you to immediately reinstate those who have been dismissed, and demand that university administrations allow academics and scientists to carry out their duties with full respect for their human rights and freedoms.”