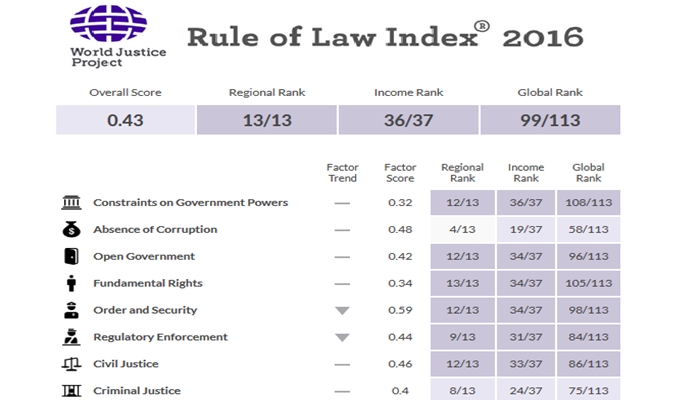 Turkey has dropped by eight places from last year in the WJP Rule of Law Index 2016, released today by the World Justice Project (WJP).

Ranked in 80th place out of 102 countries in 2015, Turkey slipped to number 99 out of 113 nations in the 2016 report. It came in 13th among the 13 countries in its region, Eastern Europe & Central Asia, in total score, comprising, in descending order of overall scores, Georgia, Bosnia & Herzegovina, Macedonia FYR, Belarus, Albania, Kazakhstan, Serbia, Moldova, Ukraine, Kyrgyzstan, Russia, Uzbekistan and Turkey.

Relying on over 100,000 household and expert surveys, the annual report measures how the rule of law is experienced by the general public worldwide and is considered the world’s leading source for original data on the rule of law.

Turkey was ranked in 108th place out of all 113 countries surveyed in terms of constraints on government powers, followed closely by fundamental rights, coming in at number 105 out of 113, among the worst scores worldwide.