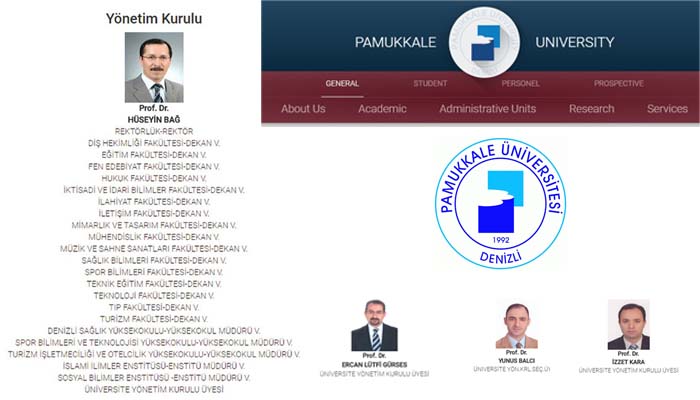 While a photo of Gümüşhane University Rector İhsan Günaydın inserted in place of the pictures of eight out of 10 university board members was going viral on Twitter on Wednesday, it emerged that Pamukkale University Rector Hüseyin Bağ was far ahead of his colleague, acting on behalf of 21 departments at his university.

According to the list of board members on the Pamukkale University website, Professor Bağ, who is also acting rector, has been listed as the acting head of 16 faculties, three graduate schools and two institutes. Other than Bağ, there were only three board members who were appointed by the university senate.

Some users wrote: “This is pluralism in Turkish universities: Rector appointed himself as dean to seven other faculties.” While some called the list of Gümüşhane University board members “a one-man band,” others said: “Despite many other universities having problems with divergent opinions, Gümüşhane University has a harmony and accord that is exemplary.”

Pamukkale University Rector Bağ said in a statement on Thursday that he was appointed by President Recep Tayyip Erdoğan and his main duty is to fight against the Gülen movement, a civil society organization inspired by the views of US-based Turkish scholar Fethullah Gülen, who Erdoğan and government accuse of masterminding a failed coup attempt on July 15.

“There have been detentions at our university. I took office after our rector [Professor Hüseyin Bağcı] was suspended from his post. The main purpose of my appointment is to fight against the cemaat [a term that means “community” in Turkish, used by the broader public in Turkey to refer to the Gülen movement]. This is a decision taken by our President [Erdoğan]. This is a big responsibility, but I have to fulfill it,” he said.

Turkey survived a military coup attempt on July 15 that killed over 240 people and wounded more than a thousand others. Immediately after the putsch, the government along with President Erdoğan passed a decree ordering the closure of 15 universities and 800 student dorms across Turkey. The shutting down of the universities has left 61,382 students in academic limbo. The same decree also ordered the dismissal of 5,070 academics working at 94 universities across Turkey, including 56 from Pamukkale University and 17 from Gümüşhane University. Some of the academics from various Turkish universities are currently under arrest.