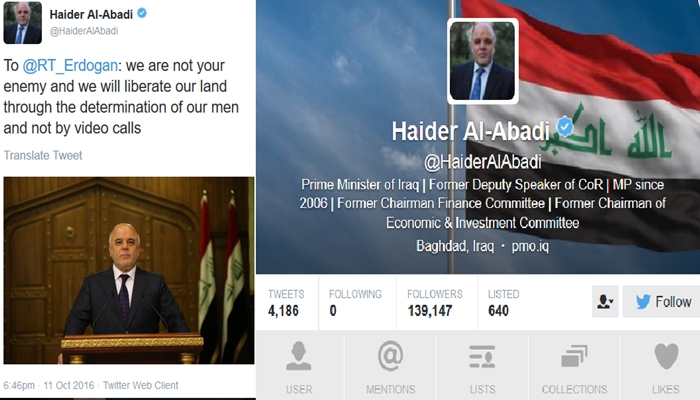 Following a reprimand by Turkish President Recep Tayyip Erdoğan of Iraqi Prime Minister Haider al-Abadi, the latter responded on Twitter, saying Iraq is not Turkey’s enemy and that Iraqis will determinedly liberate their lands.

“We are not your enemy, and we will liberate our lands through the determination of our men and not by video calls,” said the Iraqi prime minister in a veiled reference to Erdoğan’s video TV connection to people during a July 15 military coup attempt in Turkey.

Speaking at the ninth meeting of the Eurasia Islam Council held in İstanbul on Tuesday, Erdoğan strongly criticized al-Abadi, who warned Turkey that it could cause a regional war by maintaining a military presence in Iraq and called for an immediate withdrawal.
“You are not of my quality or at my level; know your place. We will go our own way in Mosul,” said Erdoğan.

Before al-Abadi responded directly to Erdoğan on Twitter, his spokesperson, Saad al-Hadithi, told AFP that Erdoğan has been pouring oil on the fire, arguing that Turkey is not serious about finding a solution to the dispute over the deployment of Turkish soldiers in Iraq.

Turkish troops in Iraq have been a contentious issue for some time, but a recent parliamentary motion that gives the Turkish government a mandate for cross-border operations in Syria and Iraq for another year sparked a backlash from Baghdad.
The Iraqi parliament decided on Oct. 4 to remove the Turkish troops, by force if needed, and described the Turkish units as an “invading force.”The decision then prompted mutual recriminations between the two countries and the summoning of ambassadors.

Iraqi Prime Minister al-Abadi warned Turkey that it may cause a regional war by maintaining a military presence in Iraq and called for an immediate withdrawal.

Meanwhile, in response to a question, US Department of State Spokesperson John Kirby said on Tuesday that it is ultimately the Iraqi prime minister who will make the final decision on a Mosul operation.

Washington-based Turkish reporter İlhan Tanır wrote on Twitter that Kirby said Baghdad is to decide on the timing of the Mosul operation. He also said that the Turkish force in Bashiqa, which is a source of contention between Turkey and Iraq, is not part of the international coalition.