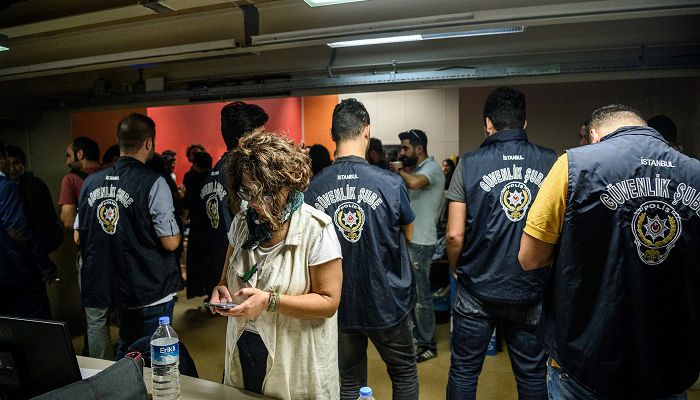 The Turkish government’s crackdown after an abortive coup on July 15 expanded into a sweeping purge on Tuesday, reaching not only into the Gülen movement, which the Justice and Development Party (AKP) accuses of masterminding the attempt, but also other minority groups across the country.

Teams from the İstanbul Police Department on Tuesday stormed the offices of three media outlets that were recently removed from the Turkish Satellite Communications Company (Türksat) platform due to their critical stance toward the government, cut off their broadcasts and detained some of their staff, Turkish media reported.

Police teams raided the offices of the Hayatın Sesi TV and İMC TV television stations and Özgür Radyo, among 33 TV and radio stations removed from Türksat by government decree on Sept. 28.

Hayatın Sesi TV was continuing its broadcasts from its YouTube channel.

The police raid on the Hayatın Sesi offices took place as a delegation from the Confederation of Progressive Trade Unions (DİSK) was there for a visit on Tuesday afternoon. The police officers sealed off the station’s broadcasting room and shut down its YouTube broadcast.

Sevda Karaca, a producer for Hayatın Sesi TV, told the Bianet news portal that the police closed down the section in which they coordinate broadcasts but did not seal off the entire building because they share it with the Evrensel daily.

“Solidarity visits to us are continuing. We are here and not going anywhere. These days teach us how difficult it is to practice journalism in this country. These days will pass, we will remember these days, but the things we’ve learned will not be useful at all to those who try to shut us down,” Karaca said.

During the police raid on İMC TV on Tuesday, the station’s general broadcasting coordinator Eyüp Burç was doing a live broadcast. When police officers attempted to cut off the broadcast, Burç asked them why they cover their faces.

“May hell be long for oppressors,” he said.

The employees of the station reacted to the police attempt to cut off the broadcast, chanting slogans such as “Free media cannot be silenced,” “Don’t remain silent, scream” and “Having a free media is a right.”

Some staff members said İMC TV is being shut down because its mission has frightened the government.

A statement released by Özgür Radyo also said its offices were raided by the police and that the police used force against the station’s employees and detained 20 of them.

Selahattin Demirtaş, co-chairperson of the pro-Kurdish Peoples’ Democratic Party (HDP), slammed the closure of the media outlets, most of which are pro-Kurdish and left wing, at his party’s parliamentary group meeting on Tuesday.

“If the closed-down media outlets had sold out their honor today, not the police but ministers would have gone to their offices as guests. They shamelessly accuse us of failing to make a speech in our mother tongue. Then they go and close down a Kurdish children’s channel,” said Demirtaş.

The HDP co-chair recently visited the Kurdistan Regional Government (KRG) in northern Iraq where another HDP deputy acted as his translator because he cannot communicate in Kurdish. Some have criticized Demirtaş for failing to speak his mother tongue; however, he said it was not his fault but the result of state restrictions imposed on Kurdish.