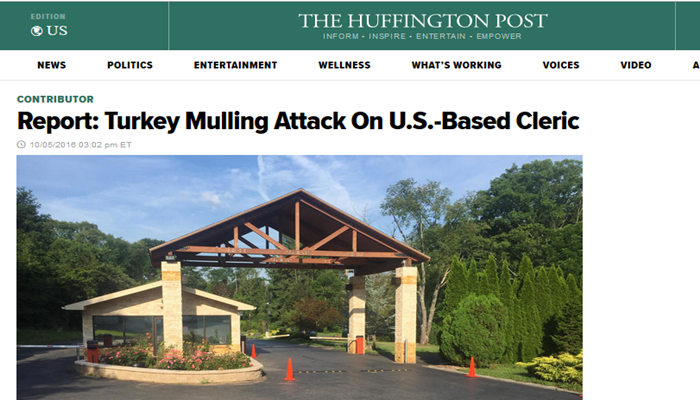 According to a report published on Oct. 5 in The Huffington Post, Turkey could be planning an attack on US-based Islamic scholar Fethullah Gülen, who the government accuses of being behind an abortive coup on July 15 in Turkey.

The in-depth report, written by Mahir Zeynalov, is as follows:

“Turkish security services have reportedly been planning an attack on U.S.-based preacher Fethullah Gülen, a Turkish cleric suspected of masterminding the July 15 coup plot, a number of sources confirmed.

The fear of attack on Gülen’s life was highlighted as recently as in early August through his lawyers who warned against a possible assassination attempt at a time when Turkish leaders at home delight crowds by chanting “death” for the cleric.

A recent meeting at a Turkish police intelligence unit had been debating a similar attack on Gülen, who is residing in a rural Pennsylvanian town since 1999, a source who was briefed on the meeting said. It was not immediately available when and where the meeting took place.
He noted that senior Turkish officials were also present at the meeting.

Another source said the subject was brought up by a Turkish official who claimed that Gülen is a very important figure in keeping his followers together and that it is impossible to eliminate the movement as long as Gülen continues leading and inspiring his sympathizers.
The source said a Turkish intelligence unit in the U.S. had been monitoring the Gülen’s compound for several weeks and that the security was easy to breach. One of the participants in the meeting even said the “security is zero” in the compound in Saylorsbourg.

The security officials renewed their focus on plotting on Gülen’s life after several participants expressed their conviction that the U.S. did not have the intention to extradite the cleric, sources said. They cast aside a possibility that Washington was willing to hand over Gülen, who is accused of directing the military coup d’etat attempt on July 15. Gülen denies the allegations.

Another source, who also had knowledge about the meeting, verified the claims.

President Recep Tayyip Erdoğan and other senior Turkish officials did not hide their intention to bring back the capital punishment. Erdoğan vowed to sign into law if the Turkish Parliament restores the death penalty. Turkey formally asked the U.S. to arrest Gülen during the extradition process, which may take for years.

A number of individuals close to the Gülen movement confirmed that they were informed by their sources in security services about a plot on the cleric’s life. Some of these reports were credible, but some of them were dismissed as hearsay, according to accounts of the individuals who spoke on the condition of anonymity to protect their sources. One of the report dated back as long as a month ago, suggesting that the discussions have been going on for at least four weeks.

It was not clear if the security services were discussing such a possibility or if they were on the planning stage.

Pro-government journalists were not that discreet in suggesting a similar solution. Fatih Tezcan, a staunch government supporter, suggested that Turkish security services must assassinate Gülen in Pennsylvania. Hüseyin Gülerce, who was long in Gülen’s inner circle but switched sides two years ago, said Gülen could be killed in an “unexpected assassination.”