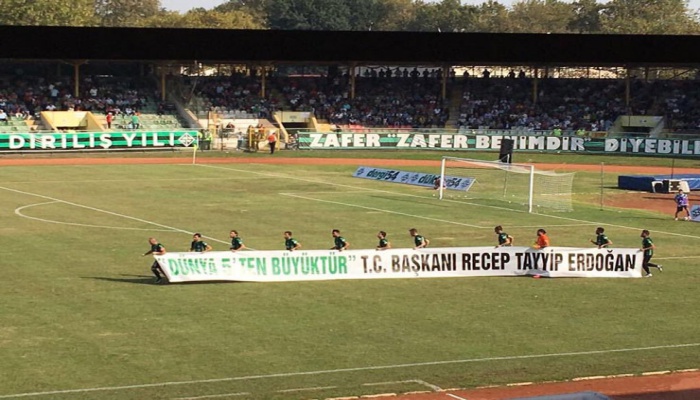 Players of the Sakaryaspor football club publicly displayed their endorsement for Recep Tayyip Erdoğan’s drive for an executive presidency before a match on Sunday.

The team lined on the pitch with a banner that read “The world is bigger than five: Turkish Republic’s President Recep Tayyip Erdoğan.”

The slogan refers to Erdoğan’s international campaign to transform the current structure of the UN Security Council, which has five permanent members with veto powers.

The Turkish president seeks to secure international support to add more countries to the permanent members’ club, which wields tremendous influence over the policies of the UN.

After the players appeared on the pitch, Sakarya Governor Hüseyin Avni Coş joined them to salute the fans.

When earlier this year Amedspor and Fenerbahçe players before a Turkish Cup quarter-final match in the southeastern province of Diyarbakır stood behind a banner saying, “Don’t let children die, let them come to the match,” the Turkish Football Federation fined Amedspor.

The match then took place in an empty stadium. The ongoing Kurdish conflict overshadowed the match as clashes between Turkish security forces and the Kurdistan Workers’ Party (PKK) were in the midst of intensifying.