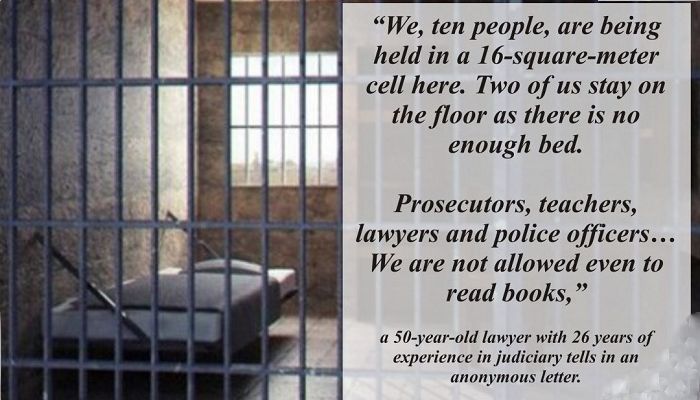 Allegations of severe overcrowding in Turkey’s post-coup prisons have proven to be true, with a recently arrested lawyer complaining in an anonymous letter about the lack of space in prison cells.

Ten arrestees are being held in a cell as small as 16 square meters, a lawyer from Turkey’s eastern region said in a letter to Emin Çölaşan, a veteran columnist from the country’s left-wing Kemalist daily, Sözcü.

In his Sunday column Çölaşan criticized the Gülen movement for being behind the controversial Sledgehammer and Ergenekon cases, which he feels victimized innocent people with fabricated evidence. Yet, he added that Turkey had not experienced a crackdown as extensive as the current one even back in those days

What follows is a translation of some of the letters Çölaşan has published to support his abovementioned claim.

“I am a 50-year-old lawyer with 26 years of experience. I have never had links to any terrorist organization. Police raided my home and found three legally circulated books, two CDs and some dollar bills. I was detained and later arrested although the dollar bills found at my home did not bear the serial numbers the government has been looking for [as an alleged communication method between coup plotters]. I was surprised to see the inside of the prison. There were prosecutors, teachers and police officers who had earlier been arrested on very simple charges: Teachers who had been arrested since they were members of a labor union; civil servants who had been arrested just because they had an account at Bank Asya…

Ten of us live in a 16-square-meter cell here. Two of us sleep on the floor as there aren’t [enough] beds. Prosecutors, teachers, lawyers and police officers… We are not allowed to read books.

We can barely take a shower with the hot water they give us in plastic buckets, for just a few minutes twice a week. Believe me, all this inconvenience does not hurt as much as the bleak picture regarding the rule of law.

There are no criteria followed to detain people. A complaint is sufficient. This has turned into a social wound.

The worst part is that real criminals tap into this situation. Not even a single member of the judiciary of sound mind dares to ask: ‘What are you doing? Do CDs, books and dollar bills lead to a terrorist organization?’ We read your columns in prison. Please spread the word in the country’s agenda.”

A female judge from one of Turkey’s western provinces who also wants to remain anonymous complained about the dire conditions in prison as well.

“Dear Mr. Emin Çölaşan, I am writing you from prison. I am a judge with 10 years’ experience in penal courts. I am in the 67th day of my arrest. I was arrested along with my public prosecutor husband. We have never had any ties to any group.

We were arrested along with a large number of judges and prosecutors from our province. (The judge who ruled on our arrest is a judge in labor courts that have nothing to do with the issue!) It is the greatest misery I have experienced in my entire life that I don’t know when this illegal detention and persecution will come to an end. My husband is held in a prison in another city. We have no opportunity to meet or communicate. We have no salary as we were removed from our jobs. Our assets and money in the bank were confiscated. We have an 8-year-old son. He was sent to his uncle. We also have another son who is 3 years old.