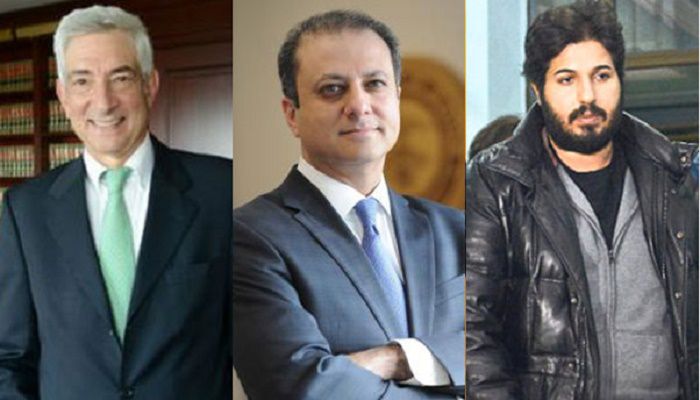 Judge Richard Berman, senior federal judge of the US District Court for the Southern District of New York, on Thursday rejected a demand for his recusal by the lawyers of Turkish-Iranian businessman Reza Zarrab and set a conference with the parties for Oct. 5 over the pending motion.

Zarrab, a Turkish-Iranian gold trader, was arrested in March in Miami as part of an investigation overseen by US Attorney for the Southern District of New York Preet Bharara on charges of violating US sanctions against Iran. Zarrab’s lawyers had asked Berman in early September to recuse himself, citing reports that the judge had attended a seminar in Turkey in 2014 allegedly organized by a law office linked to the Gülen movement, inspired by US-based Turkish Islamic scholar Fethullah Gülen.

Lawyers for Zarrab filed the motion a week before the judge whose recusal they are seeking, 72-year-old US District Court, Southern District of New York Judge Berman, was set to hear arguments over whether to dismiss the indictment against Zarrab. Zarrab’s defense asked Judge Berman to recuse himself due to his participation in a UN-sponsored conference in İstanbul in 2014 that was organized by the Yüksel Karkin Law Office, allegedly linked to Gülen.

Zarrab was arrested in Turkey in 2013 for bribing Turkish officials as part of an investigation implicating members of the Justice and Development Party (AKP) government and people close to then-Prime Minister and current President Recep Tayyip Erdoğan. He was released after the charges were dropped. The Turkish prosecutor and the police officers responsible for the investigation were either suspended or arrested after the AKP government claimed that the corruption investigation was an attempt by Gülen sympathizers in the state bureaucracy to overthrow the government.

In June Judge Berman rejected Zarrab’s request for release on $50 million bail and detention at a luxury apartment in Manhattan. Zarrab has spent tens of millions of dollars and created a dream team of lawyers, including criminal defense attorney Benjamin Brafman.

After several prosecutors were removed from the case, police investigators were reassigned and the investigation into Zarrab was dropped in 2014. Berman commented on the Turkish probe, calling it “inappropriate to change the rules of the game while the game is taking place.” According to Zarrab’s lawyers Berman’s court had already formulated opinions prior to this case, having a bearing on Mr. Zarrab’s purported criminality and his relationship with officials in the Turkish government.

During a recent speech in New York on the sidelines of the UN General Assembly, President Erdoğan went into a tirade against US federal attorneys and the court over the prosecution of Zarrab and accused the prosecutors of taking aim at him through Zarrab’s case. Erdoğan said that Zarrab is a Turkish citizen and innocent.

According to the pro-government media, Erdoğan also accused both Berman and Bharara of being wined and dined in Turkey.

US-based Turkish journalist İlhan Tanır wrote on Twitter on Thursday that Bharara responded to Erdoğan’s accusations in a speech in New York, saying the accusations are “ludicrous” as he has never even been to Turkey.

“US Attorney @PreetBharara says he never set foot in Turkey, closest he gets to Turkey is during Thanksgiving dinner,“ Tanır wrote.