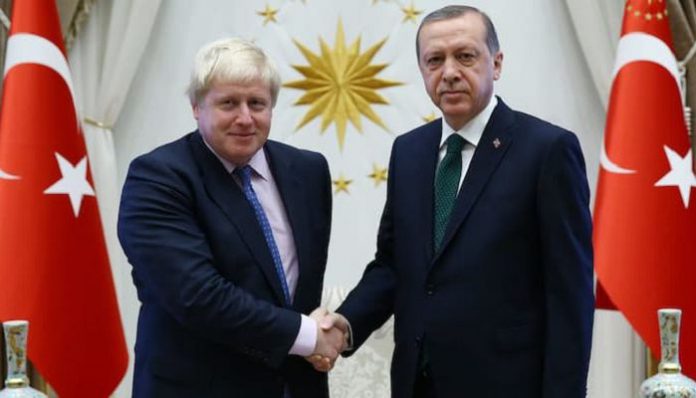 Boris Johnson, Britis Foreign Secretary who was a staunch critic of Turkish President Tayyip Erdoğan and had used a prospect during Brexit referendum that warned Britishers to leave European Union as Turkey will join EU soon with its massive Muslim population, has announced on Tuesday that now Britain will support Turkey’s bid to join the group.

Speaking to reporters in Ankara after he met with President Erdoğan in the presidetial palace on Tuesday, Johnson told that Britain would help Turkey’s bid to join the EU in any way possible.

“We may be disentangling ourselves from the treaties of the European Union, but we are not leaving Europe,” he said.

Underlining his willingness to see a new jumbo free trade deal between the UK and Turkey, Johnson reiterated his earlier statement that Britain was happy to be “one of the biggest recipients of Turkish goods.

During the EU referendum in June, Johnson warned that the accession of Turkey would give millions of migrants the right to live and work in the UK. The claim was one of the most controversial of the referendum campaign and led to accusations by senior Remain campaigners that he had lied.

In May, Johnson also won the Spectator’s inaugural President Erdoğan Offensive Poetry Competition after beating more than 3,000 other submissions. He also declined to apologise for writing the poem, “love that flowers”, between the Turkish President and a goat.

When a reporter asked whether the poem issue was raised by Turkish officials or not, Johnson said “Much to my amazement it has not come up at all. Nobody raised such trivia until you did.”

Johnson who visited a refugee camp near the Turkish border with Syria, appreciated Ankara’s policy on Syria. He also met exiled members of the Syrian opposition.

Turkey loses 5 more healthcare workers to COVID-19 in a single...