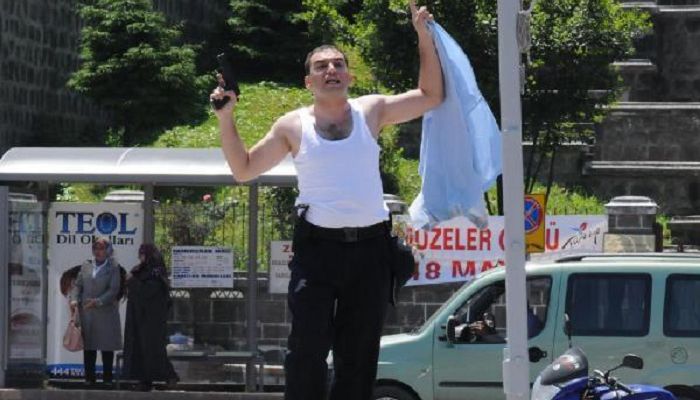 A police officer who appeared to be suffering some kind of mental collapse in Rize province on Saturday fired his gun into the air in front of a statue of Atatürk, the founder of modern Turkey, and shouted, “Do not worship this idol, worship Allah.”

Taking off part of his uniform and holding his gun in front of the statue of Atatürk in the city’s crowded Republic Square, the police officer, identified only as Ahmet, started screaming: “O Muslims of Rize. Wake up and worship only Allah.” Pointing to the statue, the officer said, “Do not worship this idol.”

Police teams rushed to the scene after the officer fired twice into the air and said: “Allahu Akbar, Allahu Akbar [There is no God but Allah], Worship only him. Do not worship this [Atatürk] idol. Wake up, O Muslims!”

After he had fired all the rounds in his handgun, police officers detained him and took him to the police station. Police sources declined to answer reporters’ questions about the source of his apparent mental collapse.