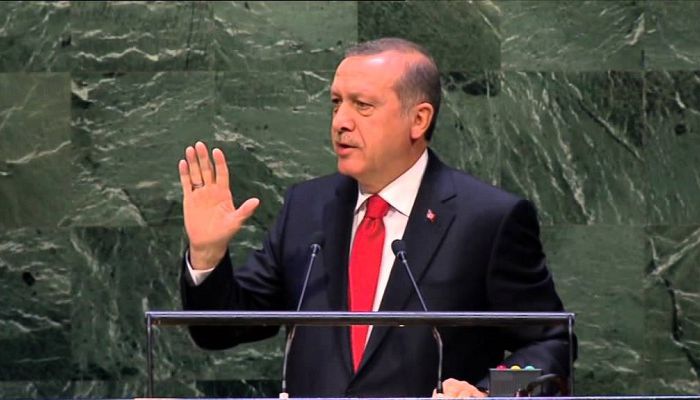 Turkey’s President Recep Tayyip Erdoğan went into a tirade against US federal attorneys and court over the prosecution of a Turkish-Iranian businessman who was a key figure in a sweeping corruption scandal that broke in late December 2013, targeting Erdoğan’s inner circle and family members.

President Erdoğan accused US prosecutors of taking aim at him in the case against Reza Zarrab, a dual Turkish-Iranian citizen who has close ties to a member of the Turkish Cabinet as well as former ministers, for violating sanctions against Iran.

Speaking to the representatives of some selected pro-government journalists in his plane on his way back to Turkey from New York on Friday after attending to the United Nations General Assembly, Erdoğan said that, according to the investigations by Turkish Finance and Justie ministries, Zarran is innocent. “Even Iran agrees on that [he is innocent]. But, despite all, he is jailed in the US,” he said.

US authorities arrested Zarrab in Miami in March on charges of helping Iran process millions of dollars of transactions when it faced US sanctions for its nuclear program, according to a Reuters report on Sunday. The prosecution of Zarrab in New York produced a new front of dispute between the two countries as Turkish authorities expressed concern over the case.

The Turkish president dismissed the charges and said Zarrab is innocent.

The young businessman is currently in custody in New York. He denies the US charges leveled against him.

What disturbed Erdoğan and other Turkish officials is that US Attorney for the Southern District of New York Preet Bharara’s office cited a 2013 corruption investigation into Erdoğan and other Cabinet members in the Zarrab indictment in New York.

President Erdoğan told a group of reporters that he had broached the issue of Zarrab during his talks with US Vice President Joe Biden in New York last week.

The Turkish president harshly criticized the US prosecutors for trying to implicate him in the Zarrab case by the inclusion of the businessman’s donations to non-profit educational organization TOGEM, which is linked to his family in the indictment.

“They are not pursuing the law, but are after a network of relationships. It’s interesting that the indictment refers to my wife setting up TOGEM and my ties with that association. My wife and I are not among the founders of that association,” Reuters quoted Erdoğan as saying.

“The effort to mention our names in court proves there are ulterior motives,” he said.

Erdoğan accuses US officials of having links to Turkish Islamic scholar Fethullah Gülen, who lives in Pennsylvania.

Zarrab’s lawyers last month filed a motion asking the federal judge, Richard Berman, to recuse himself due to comments he made about Zarrab’s prosecution in Turkey at a 2014 conference they claimed was sponsored by lawyers charged in connection with a July 15 coup attempt, Reuters reported. Berman’s chambers and a spokesmen for Bharara did not comment.

The Turkish president said Zarrab was found to be innocent by Turkish authorities after investigations into him. Erdoğan said he cannot remain indifferent to the detention of a Turkish citizen in the US.