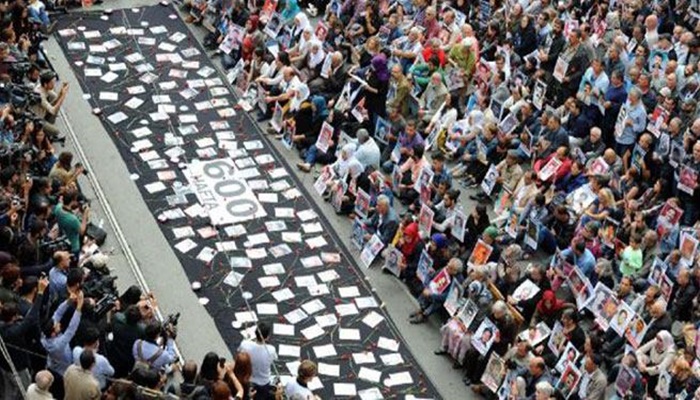 The Saturday Mothers, who gather every Saturday to bring attention to the cases of people who disappeared while in custody, had their 600th gathering in İstanbul on Saturday.
A group of journalists participated in the gathering under the slogan “We are witnesses, too” at Galatasaray Square on İstiklal Street to call on people to support the search for truth, justice and peace by the Saturday Mothers.
“Four years ago prime minister and now-President [Recep Tayyip Erdoğan] promised to solve our issues the following June. How many Junes have passed, and we still have heard nothing. I have been looking for my son for 36 years. I won’t say that I can’t take it any longer. I am still standing,” said Elmas Eren, mother of Hayrettin Eren.
“I was 12 years old when I first attended this gathering. Now I come with my son. I am the second generation of these gatherings. I hope the third generation will not take the stage,” said Besna Tosun, daughter of Fehmi Tosun, who disappeared after he was detained on Nov. 12, 1995.
Other mothers also noted that they would probably continue to gather for another 600 weeks if the current circumstances fail to change.
Tahir Elçi, former head of the Diyarbakır Bar Association who was assassinated in November 2015, was also commemorated during the gathering.
The Saturday Mothers, who first gathered on May. 27, 1995 in Galatasaray Square on İstiklal Street, have been the longest protest Turkey has ever witnessed.