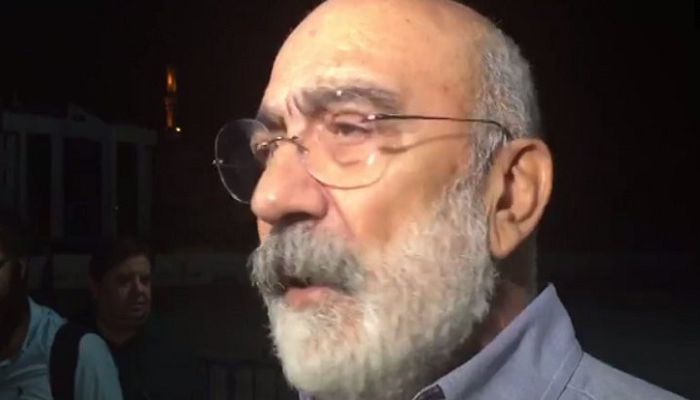 Journalist and author Ahmet Altan was arrested by an İstanbul court on Friday for allegedly “attempting a coup” and “membership in ‘FETÖ’,” a term the government coined to refer to the faith-based Gülen movement, the Cumhuriyet daily has reported.

Police detained Altan late on Thursday after the İstanbul 1st Penal Court of Peace issued a warrant for his detention following his release from custody earlier in the day.

Altan had announced that he would go to the İstanbul Courthouse in Çağlayan within 24 hours to surrender.

He was already facing an international travel ban and was also required to report to a nearby police station once a week.

After spending 12 days in detention Ahmet Altan was released under judicial supervision, while his brother, journalist and academic Mehmet Altan, was arrested by an İstanbul court early on Thursday.

The detention warrant issued by the İstanbul 1st Penal Court of Peace also mentioned that he is accused of being the former editor-in-chief of the Taraf daily, which was recently shut down by the government. The court ordered Altan to appear at the İstanbul Public Prosecutor’s Office within 24 hours.

His brother Mehmet Altan faces several charges, including “attempting to overthrow the government of the Republic of Turkey and prevent its functioning” and “membership in a terrorist organization.”

Both Mehmet Altan and Ahmet Altan, who were detained on Sept.10, were accused of sending “subliminal” messages regarding a failed coup attempt on July 15 on a TV show a day before the putsch.

Ahmet Altan is a novelist and former editor-in-chief of the Taraf newspaper. The daily ran headlines that led to the Ergenekon and Balyoz coup plot investigations, which helped the Justice and Development Party (AKP) government subdue the role of the military in Turkish politics. After quitting Taraf, Altan resumed writing harsh critical columns against the increasingly authoritarian AKP government and President Erdoğan.

Mehmet Altan, an economics professor at İstanbul University, is also a columnist known for his liberal views and criticism of the government amid increasing and unprecedented pressure on the media and dissidents. He was recently targeted by pro-Erdoğan columnist Hilal Kaplan for not being dismissed from his position at the university at a time when hundreds of academics and teachers were being expelled from their posts as part of an investigation into the failed coup attempt.
Immediately after the putsch, the government along with President Recep Tayyip Erdoğan pinned the blame on the Gülen movement.

President Erdoğan and the AKP government have turned their media crackdown into an all-out war against critical media members and outlets following the failed coup attempt on July 15.

The government has closed down more than 130 media organizations, including three news agencies, 16 TV stations, 23 radio stations, 46 newspapers, 15 magazines and 29 publishers since the failed military coup.

According to the P24 website over 119 journalists are now behind bars in Turkey.