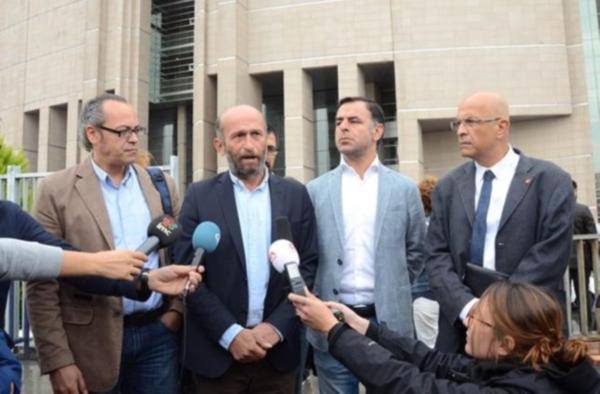 An İstanbul court on Wednesday decided to merge the trial of journalists Can Dündar and Erdem Gül with that of Republican People’s Party (CHP) deputy Enis Berberoğlu, all of whom face charges of aiding and abetting a terrorist organization over a news report about an arms shipment to Syria.

Former editor-in-chief of the Cumhuriyet daily Dündar and the paper’s Ankara representative Gül were convicted on charges of “revealing state secrets” and sentenced to more than five years in prison by an İstanbul court in May.

The charges against the journalists and Berberoğlu stem from a terrorism investigation launched after Cumhuriyet in May 2015 published photos of weapons it said were being transported to Syria in trucks operated by Turkey’s National Intelligence Organization (MİT).

On Wednesday the İstanbul 14th High Criminal Court held the first hearing of the trial in which Dündar and Gül face charges of abetting a terrorist organization without membership in it. The journalists are standing trial separately for this accusation.

Journalist Gül attended Wednesday’s hearing while Dündar was absent. The court ruled to merge the trial with that of Berberoğlu and adjourned until Nov.16.

Prosecutors seek an 18-year prison sentence for Berberoğlu, former editor of the Hürriyet daily, on charges of revealing state secrets and abetting the “Fethullahist Terrorist Organization [FETÖ] ” by giving information to Dündar for the newspaper report about the arms shipment to Syria.

FETÖ is a term the government coined to refer to the Gülen movement.

When Dündar published a book titled “We Are Arrested,” he mapped out the details of the news story on May 27, 2015, saying that a leftist lawmaker brought the information to him. Upon that new revelation, the İstanbul Public Prosecutor’s Office launched a new investigation and examined Dündar’s phone calls in the days leading up to the publication of the story.

The prosecutor’s office discovered a phone conversation between Berberoğlu and Dündar on May 27.

A new indictment was prepared for Berberoğlu, and prosecutors seek 18 years in prison for the deputy over charges of revealing state secrets and abetting FETÖ. Berberoğlu’s parliamentary immunity has been lifted.