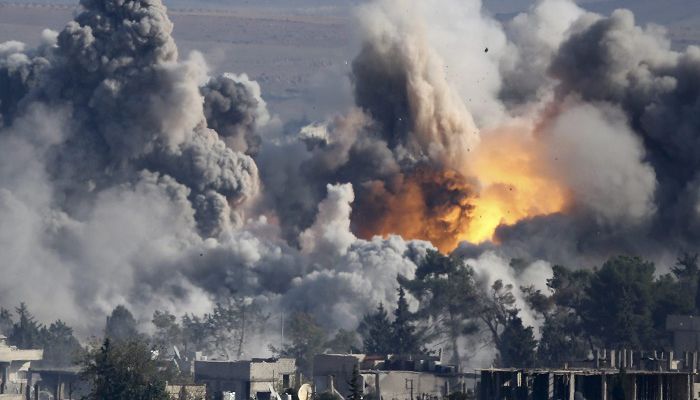 At least 12 people died after Syrian or Russian warplanes bombed aid trucks near Aleppo late on Monday after a week-long cease-fire ended, the Syrian Observatory for Human Rights (SOHR) reported.

According to the monitoring group, the attacks were carried out by either Syrian or Russian aircraft. It said the aid trucks had made a delivery organized by an international organization to an area west of Aleppo. The United Nations and Red Cross said they were investigating the report.

Aid was delivered to the besieged town of Talbiseh in Homs province on Monday, the Red Cross said, for the first time since July. The convoy brought in food, water and hygienic supplies for up to 84,000 people, it said.

Following the attack, the Syrian military declared that a week-long cease-fire was over. It accused “terrorist groups,” a term the government uses for all insurgents, of exploiting the calm to rearm while violating the cease-fire 300 times and vowed to “continue fulfilling its national duties in fighting terrorism in order to bring back security and stability.”

Speaking to reporters in New York City on Monday, US Secretary of State John Kerry said that the seven days of calm and aid deliveries envisaged in the truce had not yet materialized.

“It would be good if they didn’t talk first to the press but if they talked to the people who are actually negotiating this. We just began today to see real movement of humanitarian goods, and let’s see where we are. We’re happy to have a conversation with them,” he said.

UN Under Secretary General for Humanitarian Affairs Stephen O’Brien said in a statement on Monday, “I am pained and disappointed that a United Nations convoy has yet to cross into Syria from Turkey, and safely reach eastern Aleppo.”

According to local sources, some 275,000 civilians are believed to be trapped without access to food or medical supplies in the eastern part of Aleppo.

The cease-fire came under added strain at the weekend when Russia said jets from the US-led coalition against terrorist Islamic State in Iraq and the Levant (ISIL) killed more than 60 Syrian soldiers in eastern Syria.