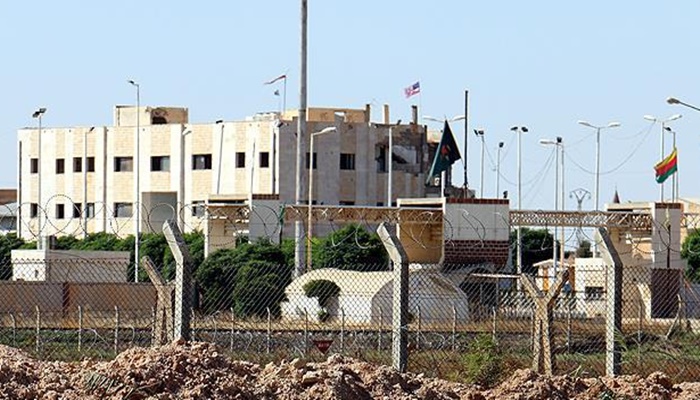 Three US flags placed on the roof of Syrian Kurdish People’s Protection Units (YPG) member buildings in a district of Tel Abyad in northern Syria were removed on Saturday, but one still continues to fly over the customs building, the state-run Anadolu news agency reported.

According to the report the US flag on the customs building could be seen from the Akçakale district of Şanlıurfa province in Turkey.

The US Department of Defense stated on Friday that they would call on the Kurdish Democratic Union Party (PYD), the political wing of the YPG, not to fly American flags in Syria. Turkey claims that the Kurdish forces use the American flags as a deterrent against possible attacks.

Pentagon spokesman Peter Cook told reporters: “We would call on our partner forces not to fly the American flag on their own. I would imagine that that would be communicated if indeed that has taken place in this instance.”

The flags’ appearance in the border town of Tel Abyad in northern Syria came on Thursday, two weeks after Kurdish fighters displayed the US flag in Manbij, following its liberation from Islamic State in Iraq and the Levant (ISIL) militants in August.

Turkey considers the YPG militia to be the Syrian branch of the Kurdistan Workers’ Party (PKK), which has waged a 32-year insurgency inside Turkey. The PKK has been designated a a terrorist group by Turkey, the US and the EU.

However, the YPG has become a key partner of the US-led coalition fighting ISIL as part of the Kurdish-Arab Syrian Democratic Forces, despite criticism from Ankara.