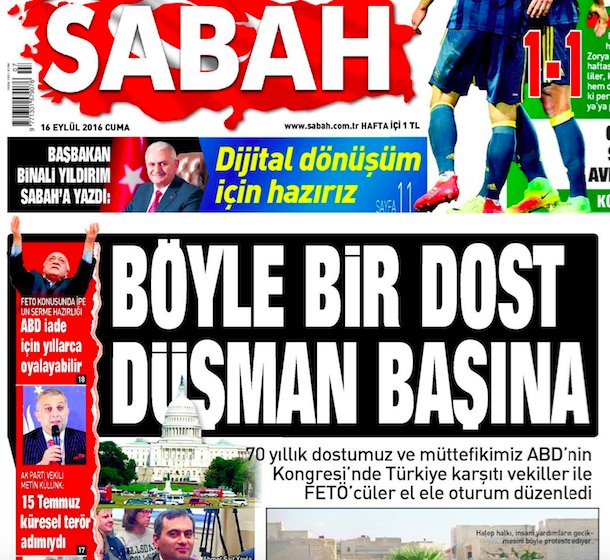 Several pro-government newspapers in Turkey have lashed out at the US administration for a recent US congressional hearing during which speakers expressed views that ran contrary to the Turkish narrative about a failed military coup attempt in July.

As the coup attempt was unfolding, President Recep Tayyip Erdoğan put the blame on the faith-based Gülen movement against which he had been waging a war since the emergence of a corruption investigation in late 2013. The Gülen movement strongly denies having any role in the coup attempt, and Turkish-Islamic scholar Fethullah Gülen, who inspired the movement, called for an international investigation into the coup.

The hearing, which was held at the US House Foreign Affairs Subcommittee on Wednesday, focused on Turkey’s democratic backsliding, especially after the July 15 coup attempt.

Yayla, a former Turkish police chief, denied at the session that Gülen plotted the coup and instead suggested that the ruling Justice and Development Party (AKP) and President Erdoğan themselves were behind it.

Yayla is among the thousands of people whose passports were revoked as part of anti-coup measures against the followers of the Gülen movement.

The pro-government Sabah daily attacked the US in its main story on Friday, saying that “anti-Turkey lawmakers and FETÖ [so-called Fethullahist Terror Organization] members held a hearing at the US Congress, a friend and ally of Turkey for 70 years.”

The daily said US House Foreign Affairs Subcommittee Chairman Dana Rohrabacher, who opened the hearing, made remarks that were filled with hatred against Turkey and the Turkish government and that he attacked the Turkish president with “treacherous” statements.

Another pro-government daily, Yeni Şafak, called the hearing at the US congress a “cheap show” in its headline story on Friday.

The daily said Rohrabacher, who it claimed had received a $500 donation from the Gülen movement, invited a Gülen-linked figure, Yayla, to give a statement at the hearing.

The pro-government Takvim daily also criticized the US over the hearing on Turkey, saying, “The US has opened its arms to FETÖ again. It put the blame on Turkey for the July 15 coup attempt. It has been blatantly involved in supporting terrorism.”

During the hearing Rohrabacher said the Turkish government’s claims against Gülen for masterminding the July 15 coup attempt lack substantial evidence and are not credible.

“The Turkish government is blaming its travail on Fethullah Gülen, a Turkish religious philosopher living in exile on a Pennsylvania farm. The claim that he personally planned and ordered the coup has been accepted by many Turkish citizens despite the lack of substantial evidence indicating that. To this effect, I don’t find such charges to be credible, and I believe that the Turkish government has erred by proclaiming anyone and everyone involved in the Gülenist religious movement to be part of the conspiracy that put on a coup,” he said.

Underlining that President Erdoğan used the failed coup attempt as an opportunity to expand his political power, Rohrabacher said the upheaval following the failed coup has been a traumatic experience for the people of Turkey.