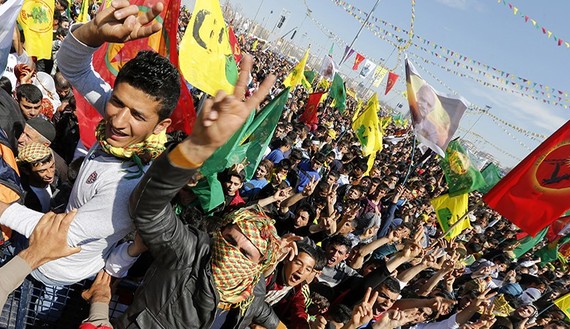 After months of almost total isolation, the Turkish government permitted visits to leader of the Kurdistan Workers’ Party (PKK) Abdullah Öcalan, who is serving a life sentence in an island prison in the Sea of Marmara. Family members were not allowed to visit the Kurdish leader for over two years.

After a visit to the island, in a statement released by Mehmet Öcalan – brother of Abdullah Öcalan — at a press conference last week, the jailed leader called on the Turkish government to “keep up the peace talks with the PKK,” suggesting that the Kurdish question could be solved within six months if the two sides could agree on certain matters. However, many experts are of the opinion that it is very unlikely the ruling Justice and Development Party (AKP) will listen to such calls, and to the contrary the conflict between Turkish security forces and the PKK looks set to intensify, particularly in southeastern Turkey.

If this is the case, why then did the Turkish government let his brother visit the PKK’s imprisoned leader Abdullah Öcalan on the eve of the Eid al-Adha holiday? Is there any chance that the stalled Kurdish peace process might come to life again? Under what conditions could peace talks be re-started between the Turkish government and the PKK? These are some of the key questions that not only public opinion in Turkey but also many in the region and beyond wonder about.
How realistic is it to expect peace talks to restart?
There are three strategic reasons behind the fact that any potential peace talks between the Turkish government and the PKK are unlikely to occur in the short term.

First, neither the Turkish government nor the PKK seems to have the determination to boost the stalled peace process. Since the termination of the peace talks last July, the Turkish government has applied the military logic of “all or nothing” towards the PKK, underlining that the government seems prepared to pay any price necessary to defeat the Kurdish guerillas. For that, President Erdoğan made clear in his speeches multiple times that “unless a total defeat and elimination of the PKK is achieved, Turkey’s fight against terror will continue.” As a result of this unyielding stance, the settlement of the conflict has been re-remitted to the military rather than Parliament, which ensures that no political solution for the three-decade-long conflict will emerge any time soon.

On the other hand, the PKK is also not in a position to ask that the peace negotiations be re-started. The recent number of recruitments by the PKK not only in southeastern districts but also in major western cities of Turkey is significantly increasing. The PKK’s recent expansion in terms of size and ideological strength, in fact, have much to do with the heightened military presence of Turkish security forces in Kurdish towns since last July, the recent purge against pro-Kurdish Peoples’ Democratic Party (HDP) deputies, some of whom despite their immunity are looking for asylum in a number of EU member states, and the current ongoing appointment of trustees to municipalities that are run by elected HDP mayors. These developments ensure that the PKK for the time being has no intention whatsoever of being in the business of give-and-take since its public support has risen.

Second, Turkey’s strict opposition to any Kurdish political formation in northern Syria is a serious challenge to any future peace talks between the PKK and the Turkish government. Despite the fact that the Turkey-Syria border has recently been wrested from the Islamic State (IS), many in the field argue that Ankara’s primary strategic goal with its recent involvement in Euphrates Shield is to prevent the People’s Protection Units (YPG), which is linked to the PKK, from dominating northern Syria and to guarantee full control of the Turkey-Syria border. Those who follow statements of the PKK leaders in Qandil know that the PKK would be always reluctant to retreat from any achievement it has gained over the last decade in Syria. Therefore, one can argue that the PKK pays extreme strategic attention to its presence in Syria and would not want to risk it in the business of give-and-take with Turkey.

Third, beside non-binding calls and recommendations, the international community, particularly the US and the EU, are not in a position and have no keen interest to exert influence and efforts to bring the two sides together. Turkey is now a critical ally more than ever for the US administration on repelling IS, while Ankara is also considered by the European Union to be the most important strategic partner for stopping the refugee flow from Syria to Europe. In such a tense political context, neither the US nor the EU perceives the restart of the Kurdish peace process as a priority to be revisited within the framework of their relations with Turkey.