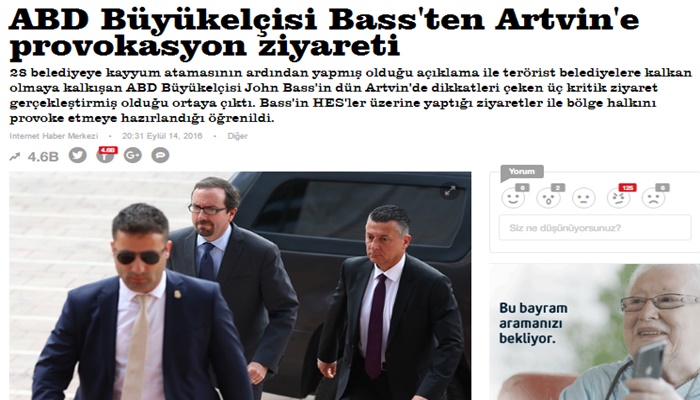 US Ambassador to Turkey John Bass, who has been under fire from the Turkish government for a recent embassy statement on the appointment of trustees to some municipalities in the country’s predominantly Kurdish Southeast, was targeted by pro-government media for a visit to Artvin province on Wednesday.

Mentioning Bass’s visits to the Şavsat and Yusufeli districts of Artvin on Tuesday, the website of the Yeni Şafak daily claimed that the US ambassador had visited three hydroelectric power plant (HES) sites in the region.

“We have leaned that Bass was trying to provoke locals by visiting HES sites,” said the Yeni Şafak website under the headline: Provocative visit to Artvin by US Ambassador Bass.

Yeni Şafak also claimed that in order to avoid attracting attention, Bass used a civilian car during his visit to Artvin.

HES has been a delicate issue in the Black Sea region, where locals and environmentalists have resisted the government’s energy plans.

The pro-government Sabah and Akşam dailies also published the same story in their online editions.

News stories came amid strong criticism of Ambassador Bass for a recent embassy statement on the appointment of trustees to some municipalities.

Interior Minister Süleyman Soylu on Wednesday continued his criticism of Bass, saying that he cannot draw a roadmap for an independent state like Turkey.

“Ambassadors of the countries with which we have been allies for years have been making statements on issues that do not concern them. From our perspective, this is not an appropriate situation. You cannot draw a roadmap for an independent country. We have been saddened by their talk as if trying to tell us what to do,” said Soylu on Wednesday without mentioning the name of Bass.

The US Embassy on Saturday released a statement on its website expressing concern about clashes in Turkey’s Southeast following a government decision to remove elected officials from office and replace them with trustees, saying it hopes any appointment of trustees will be temporary and that citizens will soon be permitted to choose new local officials in accordance with the law.

In another statement on Monday, Soylu also said he sees the ambassador’s remarks as an intervention into Turkey’s domestic affairs and finds such an evaluation unacceptable.

Other government officials also criticized Bass for the embassy statement.

Justice Minister Bekir Bozdağ voiced his criticism in a series of tweets on Monday.

“Turkey is an independent, sovereign, strong and big state. Without asking any state or power, Turkey makes its laws by means of the members of the Turkish Parliament, who were directly elected by the free will of the people. Turkey does not and can not allow the intervention of any country when exercising its legislative and executive power,” he wrote.

Foreign Minister Mevlüt Çavuşoğlu on Tuesday also criticized the ambassador, saying that the US ambassador is not the governor of Turkey.

“Your ambassadors are not governors in Turkey. They should do their jobs properly within the framework of the Vienna Conventions,” Çavuşoğlu said.