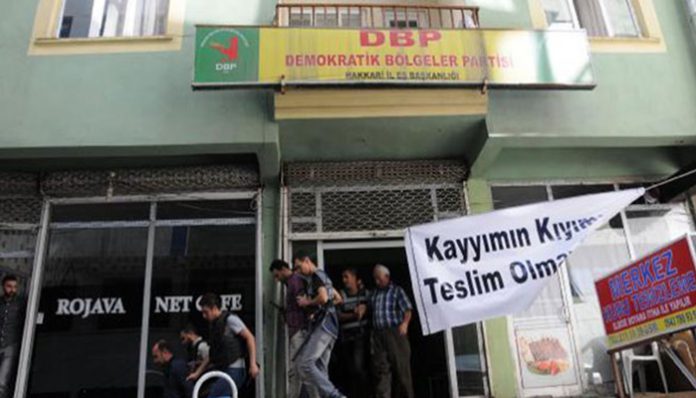 Police raided the pro-Kurdish Democratic Regions Party (DBP) provincial office in Hakkari on Thursday and detained around 20 people who have been conducting a hunger strike to protest the appointment of trustees to municipalities in Turkey’s Southeast, DHA reported.

The Interior Ministry appointed trustees to 28 local municipalities on Sunday, 24 of which were run by DBP and Peoples’ Democratic Party (HDP) and allegedly linked to the terrorist Kurdistan Workers’ Party (PKK), while the other four were allegedly connected to the faith-based Gülen movement.

The HDP reacted adversely to the government’s new measures concerning the municipalities.

“The appointment of trustees is laying the groundwork for an internal war. This is a provocation. There is nothing left to talk about on this issue in terms of democracy and the law,” said HDP co-spokesman Ayhan Bilgen during a press conference on Sunday.

HDP Co-chairperson Figen Yüksekdağ described the move as a coup against the will of the people, calling for mass protests against the decision on Sunday.

Justice and Development Party (AKP) deputy group chairman Bülent Turan said on Tuesday that the recent appointment of trustees to some municipalities run by the HDP is not sufficient and that trustees should be appointed to take over the entire party.

Murat Karayılan, leader of the Kurdistan Communities Union (KCK) – an umbrella organization that includes the terrorist PKK — said in a statement in June that they will directly attack the trustees that the government is planning to appoint to HDP mayors’ offices.

“If they [the government] take over [HDP mayors’ offices], we will target whoever is appointed to replace the mayor. I am saying this openly. They want to expand the war, and they are imposing this on us. Of course, we will respond accordingly,” Karayılan said.