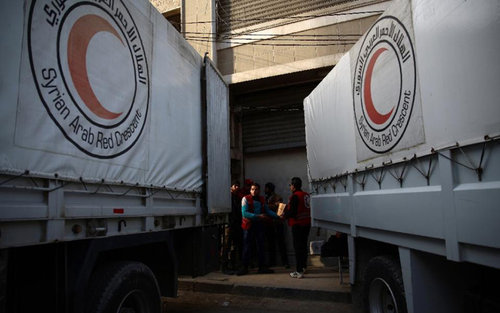 Two convoys of aid bound for Aleppo were stranded on the Syrian side of the border after passing through Turkey’s Cilvegözü border gate as a Russia-US brokered cease-fire struggles to hold amid bickering between the warring sides.

At least 40 trucks, mostly carrying food and flour, made little headway on Tuesday after passing the border gate 25 miles west of Aleppo. Turkish President Recep Tayyip Erdoğan last month spoke to Russian President Vladimir Putin about the need for the creation of a humanitarian corridor to Aleppo, which has recently come under heavy air strikes.

While the US and Russia pressed on Friday for a new truce to allow stalled peace talks to be revived, disagreements between the warring sides are hampering humanitarian efforts to deliver aid to besieged civilians.

Reuters reported enduring challenges for the latest aid convoy in a piece published in Wednesday. While the humanitarian need is urgent and there is at least some sort of diplomatic vigor to deliver it, realities on the ground have the final say.

Until the warring sides resolve disputes between themselves, the aid trucks are destined to remain stranded in no-man’s land, just on the Syrian side of the border.