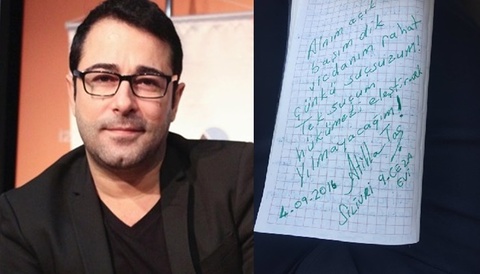 Journalist and former singer Atilla Taş, who was jailed on Saturday as part of an investigation into the faith-based Gülen movement, has sent a note from prison saying that he was put behind bars just because he criticized the government.

Republican People’s Party (CHP) deputy Veli Ağbaba announced from his Twitter account on Sunday that he visited journalists Taş and Murat Aksoy in Silivri Prison and brought back a handwritten note from Taş.

Ağbaba shared a photo of Taş’s note on Twitter. In the message Taş says: “I feel proud and honored, and my conscience is clear because I am innocent. My only crime was to criticize the government. I will not be subdued.”

Journalists Taş, Aksoy, Mutlu Gölgeçen and Gökçe Fırat Çulhaoğlu were jailed in İstanbul on Saturday as part of what has become a witch-hunt against the Gülen movement.

Dozens of media organizations were closed and dozens of journalists were jailed by the government following the coup attempt.