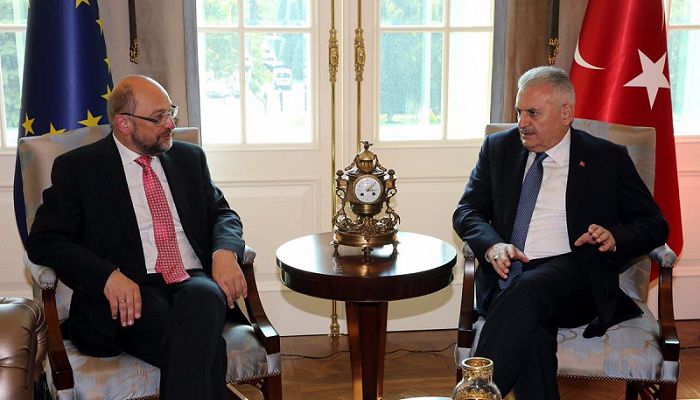 Schulz and EU Migration Commissioner Dimitris Avramopoulos held separate meetings with Turkish officials on Thursday. The visit of the EU officials came after Ankara threatened to suspend the deal if Brussels fails to deliver visa liberalization for Turkish citizens.

The deal that was agreed in March after months of diplomatic wrangling between the sides drastically reduced the migrant flow to Europe and afforded some breathing space to the union, which had seen more than 1 million refugees descend on the continent. The final destination of a majority of the newcomers was Germany, the leading EU country that pressed for a deal with Ankara after registering 1.1 million migrants last year.

Turkey’s push for lifting visa restrictions by October has taken on new urgency, and officials have begun to employ threatening language. To avoid another breakdown in cooperation over the migrant issue, Schulz met with top Turkish officials, including Prime Minister Binali Yildirim.

One of the key remaining obstacles for fulfillment of the deal is Ankara’s resistance to meeting a demand from Brussels to soften its anti-terror laws, which critics say are too broad and vague and mostly silence critical voices in Turkey.

Yildirim dismissed calls for a change to the anti-terror laws and said it is even not an option.

“We are not moving forward because the counterterrorism law is not being reformed,” Schulz told a joint media conference with Yildirim. “We agree on many things, but we do differ on certain issues. Visa-free travel can happen after … the completion of all the criteria, including the anti-terror law,” The Associated Press reported.

Yildirim retorted: “The anti-terror law is the issue that we cannot agree on.”

The AP report continued: ”We as Turkey have made our stance clear: There will be absolutely no wavering, no stepping back regarding the fight against terrorism,” Yildirim said. “Anti-terror is not just about the safety of the Turkish people but also about Europe’s security.”

Despite the differences of views over the issue, however, the European Parliament chief said it does not mean the deal will fail.

The EU officials also expressed support for the Turkish government, which weathered a bloody coup attempt in mid-July.