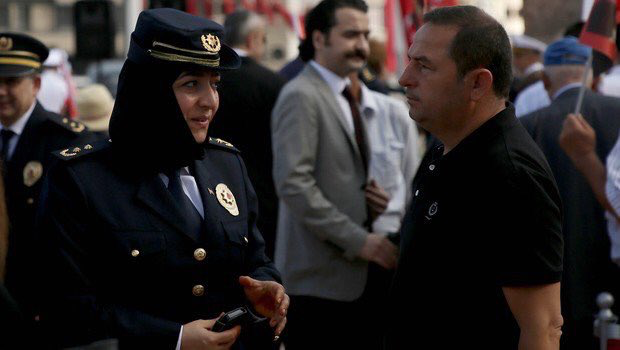 Following the Turkish government’s abolishment of a ban that prohibited female police officers from wearing an Islamic headscarf while on duty, a female police inspector wearing a headscarf for the first time appeared in public during Victory Day celebrations in İstanbul on Tuesday.

Victory Day marks the 92nd anniversary of the Turkish victory against Greek forces at the Battle of Dumlupınar, the final battle of the War of Independence.

The police inspector was wearing a black headscarf under her beret.

The headscarf ban for police officers was abolished according to a decree published in the Official Gazette on Saturday.

A decades-old prohibition on headscarves in the civil service was lifted in 2013 but excluded the police, military and judiciary.

According to the new regulation, female police officers can wear a plain, uniform-colored headscarf under a hat or beret without covering their face.