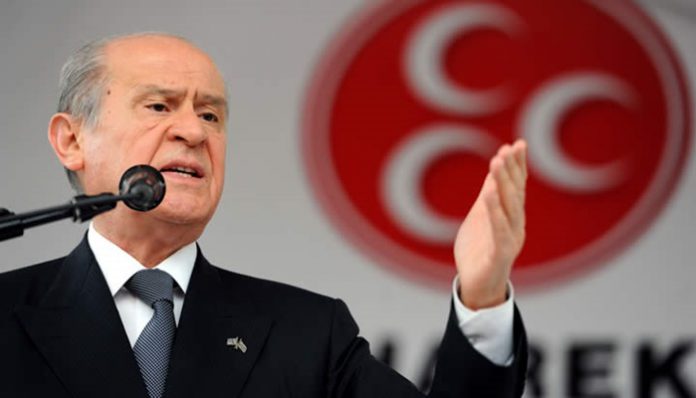 Opposition Nationalist Movement Party (MHP) leader Devlet Bahçeli said on Monday that he will participate in the ceremony to open the new judicial year to be held at the presidential palace in Ankara on Sept. 1.
“I do not understand why the main opposition leader [Republican People’s Party (CHP) leader Kemal Kılıçdaroğlu] does not want to attend the ceremony at Beştepe [the presidential palace],” said Bahçeli while speaking to media at MHP headquarters in Ankara.
Underlining that a ceremony at a presidential palace would harm the independence of the judiciary, Kılıçdaroğlu announced over the weekend that he would not participate in the Sept. 1 event.
Metin Feyzioğlu, chairman of the Union of Turkish Bar Associations (TBB), also said he would not be present at the ceremony.
“I will not participate in the ceremony if it is not held in a place that does not harm the principle of separation of powers,” Feyzioğlu had told Turkish news portal T24 at the weekend.
“We were first told that the ceremony would take place at a hotel in Ankara,” Feyzioğlu added, in reaction to a choice of venue that leads to concerns over the independence of the judiciary from the executive.
No change of venue
Meanwhile the Council of State declared on Monday that the venue of the ceremony will not be changed but that a reception which was planned at Parliament has been cancelled out of respect for the martyrs of counterterrorism operations.
Turkish President Recep Tayyip Erdoğan on Aug. 16 had hosted a TBB delegation, including Feyzioğlu, in a surprise move given the previous war of words the two engaged in during an earlier judicial ceremony.
Erdoğan and Feyzioğlu were at odds after an incident on May 10, 2014, when Feyzioğlu delivered an hour-long speech criticizing the government, at a ceremony marking the Council of State’s 146th anniversary. Erdoğan interrupted Feyzioğlu, accusing him of impertinence for speaking critically of the government at a judicial event before storming out of the hall.
President Erdoğan later vowed not to attend any future meetings in which Feyzioğlu was scheduled to speak. Erdoğan and government members were not present at a Sept. 1 ceremony last year after the Supreme Court of Appeals decided to include Feyzioğlu on the list of speakers.