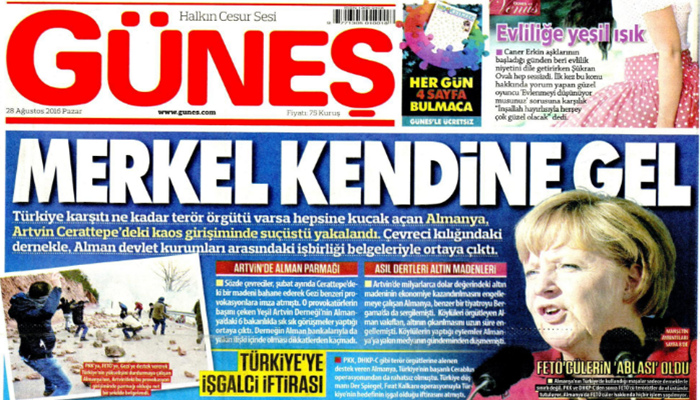 A pro-government Turkish daily has accused Germany of masterminding environmental protests in Turkey’s Black Sea region in February, saying that Germany collaborated with “fake” environmentalists in order to prevent Turkey’s mineral resources from being exploited.

“Come to your senses, Merkel,” the Güneş daily said in the headline of its major story on Sunday, appealing to German Chancellor Angela Merkel.

Massive demonstrations took place in February to protest the building by Cengiz Holding of a mine complex in in an ecologically pristine area in the Cerattepe district.

Güneş reported that a civil society organization which it said claims to be independent and environmentalist sent letters to several German ministries about Cerattepe, raising suspicions that it is funded by Germany.

The daily said the organization’s members also repeatedly travelled to Germany and had meetings there.

According to the daily, the goal of such “seemingly environmentalist” organizations is to prevent Turkish mineral resources from being exploited and to ensure that Turkey’s dependence on foreign countries for such natural resources continues.