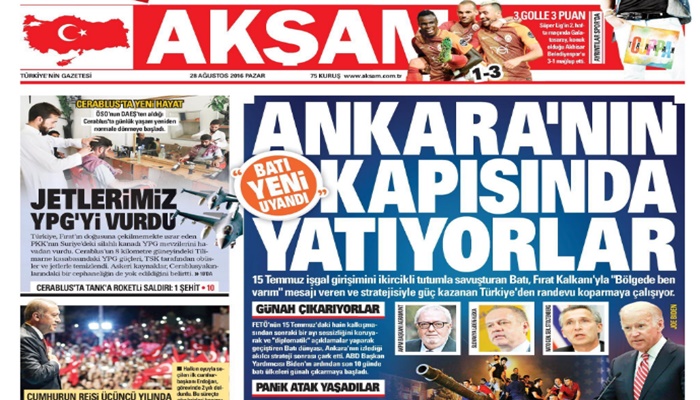 The pro-government Akşam daily has claimed Western leaders are begging to get an appointment from a “rising Turkey,” which it said has gained power with the Euphrates Shield operation launched last week in Syria.

In its lead story on Sunday, Akşam said while Western leaders simply issued some “diplomatic” statements concerning the July 15 failed military coup, which it asserted was done “hypocritically,” they have now been impressed with Turkey’s operation in Syria and are anxious to pay Turkey a visit.

Featuring photos of Western leaders such as US Vice President Joe Biden and NATO Secretary-General Jens Stoltenberg, the daily said they were just “confessing their sins.”

It is very common for pro-government news outlets in Turkey to accuse Western leaders of hypocrisy and fuel anti-Western sentiment in the country.

Turkey last week launched an operation called Euphrates Shield into Syria along with Syrian rebel forces to clear the Syrian city of Jarabulus of Islamic State in Iraq and the Levant (ISIL) militants and to contain Kurdish expansion in the area.