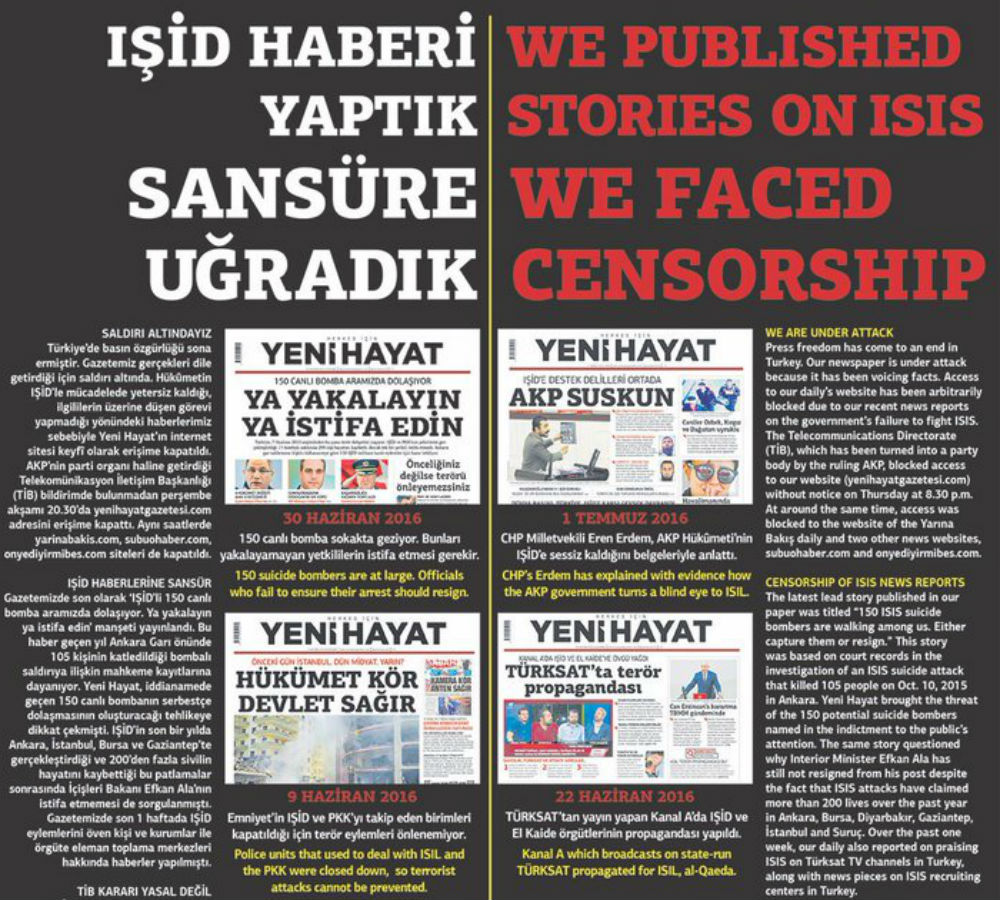 One of the few remaining independent dailies in Turkey, Yeni Hayat, has released a public statement after access to its website was blocked over its lead story on Thursday — which claimed there are currently 150 potential suicide bombers linked to the terrorist Islamic State of Iraq and Syria (ISIS) in Turkey – as part of ongoing government crackdown on free media in Turkey.

The statement is as follows:

We are under attack

Press freedom has come to an end in Turkey. Our newspaper is under attack because it has been voicing facts. Access to our daily’s website has been arbitrarily blocked due to our recent news reports on the government’s failure to fight ISIS, as well as the relevant ministries’ failure to fulfill their responsibilities on the issue.

The Telecommunications Directorate (TİB), which has been turned into a party body by the ruling Justice and Development Party (AK Party), blocked access to our website (yenihayatgazetesi.com) without notice on Thursday at 10 p.m. At around the same time, access was blocked to the website of the Yarına Bakış daily (yarinabakis.com) and two other news websites, subuohaber.com and onyediyirmibes.com.

The latest lead story published in our daily’s print edition was titled “150 ISIS suicide bombers are walking among us. Either capture them or resign.” This news report was based on court records in the investigation of an ISIS suicide attack that killed 105 people on Oct. 10, 2015 outside the Ankara Railway Station. Yeni Hayat brought the danger of the 150 potential suicide bombers named in the indictment walking freely on the streets to the public’s attention.

The same news story questioned why Interior Minister Efkan Ala has still not resigned from his post despite the fact that ISIS attacks have claimed more than 200 lives over the past year in Ankara, Bursa, Diyarbakır, Gaziantep, İstanbul and Suruç.

Over the past one week, our daily also reported on several individuals and entities that openly praised ISIS on Türksat TV channels in Turkey, along with publishing news pieces on ISIS recruiting centers in the country.

TİB initially announced on its website that it based its decision on Article 8 of Law 5651. However, this article stipulates blocking of publications that promote suicide, sexual abuse, drug use, prostitution and gambling. Having noticed that it is impossible to substantiate such an arbitrary move with this article, TİB later removed the statement from its website. The yenihayatgazetesi.com website remains blocked, the decision apparently resting with TİB officials who are receiving orders from unnamed authorities.

They want to silence our daily

We are concerned that the attacks on our daily, which began with the TİB decision, will not be limited to that. Having been targeted by social media accounts close to the government, we are concerned that other unlawful steps are likely to be taken against our daily. In fact, Turkey’s best-selling Zaman daily, as well as the Koza İpek Media Group and the Samanyolu Broadcasting Group, were earlier silenced by the government, leaving more than 2,000 journalists unemployed.

We would like to announce that we will file criminal complaints against all bureaucrats and members of the judiciary who unlawfully blocked access to our paper’s website as well as became involved in other unlawful acts on charges of aiding and abetting ISIS.