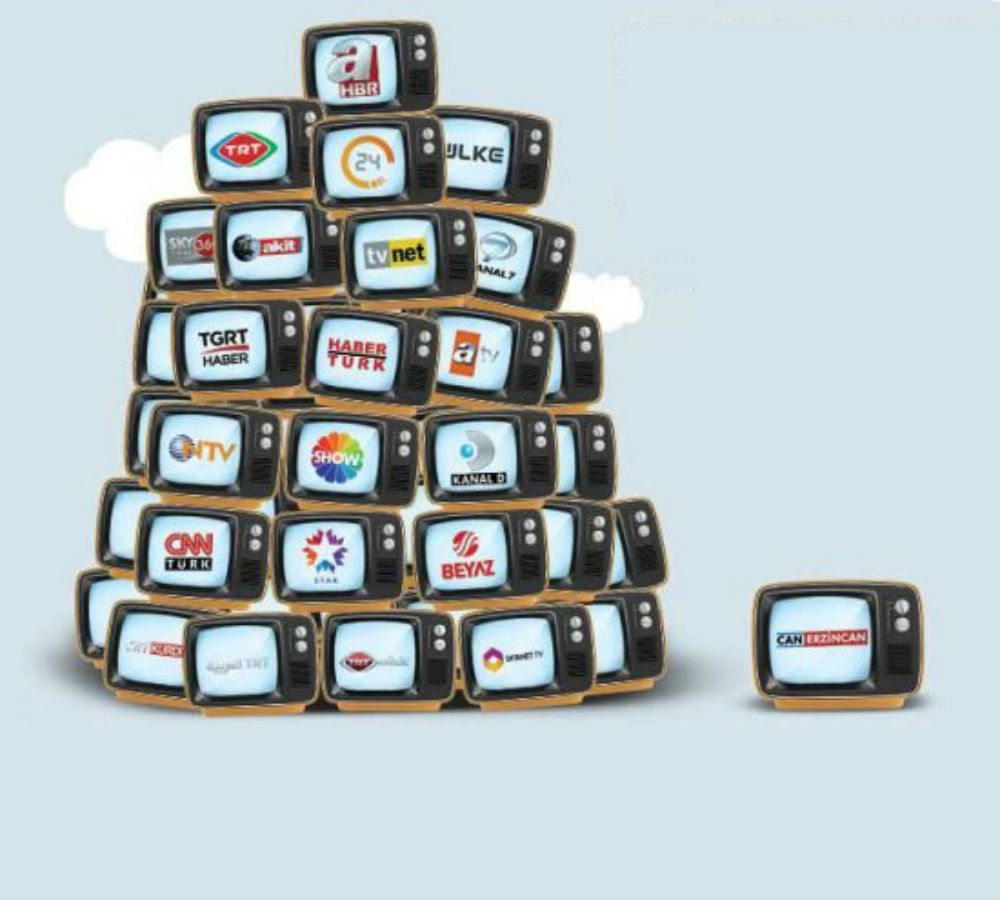 Criticism grows over an attempt by government – which controls 95 percent of the media organs — to shut down Can Erzincan TV, a station known for its critical stance against the government.

A pro-government daily reported on Sunday that İstanbul Chief Public Prosecutor Hasan Yılmaz has sent a notice to Turkish Satellite Communications Company (Türksat) recommending the suspension of Can Erzincan TV’s broadcasting on the grounds that its programs serve the purposes of Gülen movement.

The move came after 15 TV channels, 5 radio stations, 3 newspapers and a magazine critical of the Justice and Development Party (AK Party) government were shut down in the last nine months.

Lawyers representing Can Erzincan TV were not able to get any information about the investigation launched against the station and were told that it was confidential. Social media users have posted tweets using the hashtag #Kapatma (Do not shut it down!) to raise their voices against the attempt.

Speaking to Turkish daily Yeni Hayat, a number of press association members and politicians reacted against the government-led attempt to shut down Can Erzincan TV.

Professor Sedat Laçiner, a former university rector, said that critical media has no right to live in Turkey. “Being critical of the government means the same thing as being a criminal in Turkey now. The judiciary considers being dissent as an element of crime. … They either silence the media or regard its actions as crime,” Laçiner added.

Turkish Journalists’ Association (TGC) President Turgay Olcayto said that the government accuses Gülen movement of forming a “parallel state” but has no evidence to support the claim.

“If it [Can Erzincan TV] is shut down, no media organ will be left for the critical press members to work soon. … This way, they [government figures] destroy people’s freedom of information. How will the members of the society act without learning about the truth? When they shut down TV channels like this one, all that is left is bunch of superstitions,” Olcayto also stated.

Former Culture and Tourism Minister Ertuğrul Günay emphasized that there are no investigations launched against the press workers in Can Erzincan TV. Günay added that shutting a TV channel without any suspicions of crime could not take place in a democratic rule.

Pak Medya-İş Chairman İsmail Topçuoğlu also reacted against the move, saying “Do you want press members to starve to death? They just do the job they know how to do. What do you expect from them? … Most of them haven’t received their payments from the trustees appointed to their former workplaces. What else can they do [to provide for themselves and their families]?”