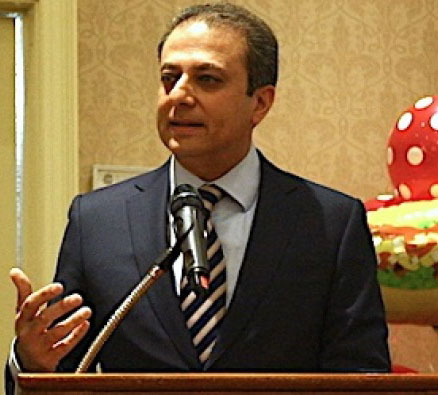 Liberal Democrat Party (LDP) has invited US Attorney for the Southern District of New York Preet Bharara to Turkey to give a talk at a conference on the role of the judiciary in protecting free speech.

Bharara has gained widespread popularity in Turkey after he filed a case against a Turkish-Iranian businessman, Reza Zarrab, who was the prime suspect in a corruption investigation that became public in late 2013 in Turkey.

LDP leader Cem Toker has sent an invitation letter to Bharara in which he said: ” I, as the national chairman [of the LDP], would like to extend you an invitation to a conference in İstanbul at a date of your convenience on “Role of The Judiciary in Protecting Free Speech.”

In the letter, Toker said Bharara’s indictment against Zarrab along with his statements regarding freedom of expression and press and rule of law during his address at the New York Press Association has put him personally, the US judicial system and jurisprudence under the spotlight in the press, academia and the social media in Turkey.

During a speech at the New York Press Association Spring Convention last Friday, Bharara commented on how he unexpectedly became very popular among Turks after he indicted Zarrab of money laundering, bank fraud and conspiring for years “to violate and evade United States sanctions against Iran and Iranian entities.”

“On the date we engaged in the arrest, on the day that Mr. Zarrab was arrested in Florida, I had 8,100 Twitter followers. Within 4 days, I had gained 270,000 Twitter followers, virtually all of them from the nation of Turkey. And part of the reason for that was, as has been widely reported, there’s a feeling that corruption is not being dealt with in that country. I’m not going to make any comment on that, but that’s a feeling of what was going. And the other reason that it’s been widely reported is that people have not believed that there was a free press there and so there’s a lot more of people taking to the freedom of social media,” the attorney said.

Zarrab’s arrest came at a time when Turks almost lost hope of justice being served in 2013’s corruption probe because the charges against the suspects were immediately dropped with the appointment of new prosecutors to the investigation. In addition, the police officers and some prosecutors and judges who took part in the probe were sent to jail over coup charges.

Along with Zarrab, government ministers and pro-government businessmen were implicated in the graft probe, which became public with a wave of detentions in Turkey on Dec.17, 2013.