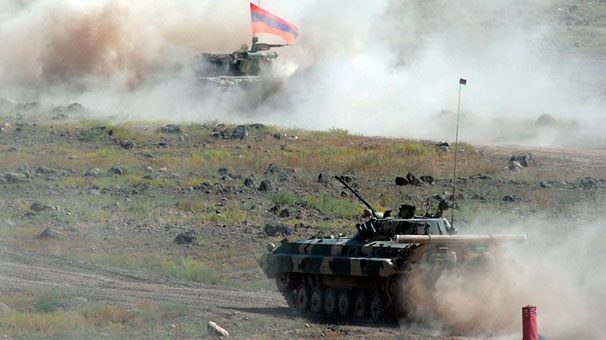 One Azeri civilian and three Armenian soldiers have been killed in a renewed escalation of tension between the countries, as Russian President Vladimir Putin called for restraint.

The escalation of violence began with the Armenian army’s shelling of a civilian area in Azerbaijan, which resulted in the death of an Azeri. The Azerbaijani army returned fire killing three Armenian soldiers.

A statement from the Azerbaijan Foreign Ministry said that the Armenian Army had been using 82 and 120 millimeter mortars to shelling civilian populated areas as well as military bases. The statement added that the Armenian army had retaliated. The tension is reported to have risen in the Ağdere, Terter, Ağdam, Hocavend and Fuzuli districts.

Russian President Vladimir Putin called both sides to exercise restraint and urged both Azerbaijan and Armenia to implement the ceasefire “immediately.” The Kremlin spokesperson Dmitry Peskov said that Putin feels “deep concern” from the rise in tension between the two countries.

Nagorno-Karabakh, a predominantly Armenian enclave within Azerbaijan’s borders, and seven other Azerbaijani adjacent territories were occupied in a bloody war in the early 1990s, since when Azerbaijan has been trying to get its lost territories back. One million ethnic Azeris were forced from their homes and more than 30,000 were killed. A cease-fire was brokered in 1994 when officials from both sides engaged in internationally mediated negotiations under the OSCE Minsk Group.