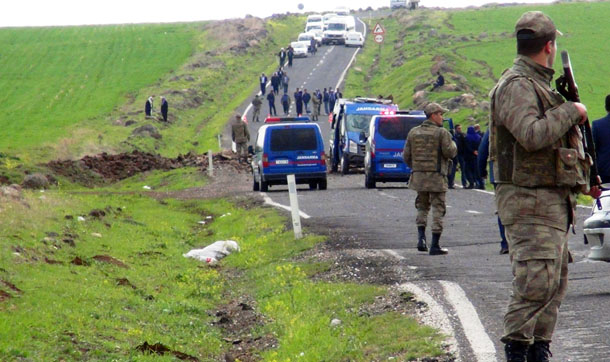 Three soldiers were injured a when a bomb planted on the road was remotely detonated by the terrorist Kurdistan Workers’ Party (PKK) in the southeastern province of Şanlıurfa’s Siverek district on Monday.

The attack took place on Şanlıurfa-Siverek highway near Yücelen village. The bomb which was previously planted by the PKK, was remotely detonated while the vehicle carrying military personnel was passing. Gürkan Acur, Muharrem Volkan Karadaş and Uğur Baltaş were injured in the incident. The soldiers were taken to the Siverek Devlet Hospital for treatment.

The operations against the terrorist Kurdistan Worker’s Party (PKK) began after the frail ceasefire set up in 2013, as part of the settlement process was ended on July 22, 2015 when the PKK assassinated two police officers. The PKK said it acted in retaliation for the state failing to prevent a suspected Islamic State of Iraq and the Levant (ISIL) militant detonating a suicide bomb in Şanlıurfa’s Suruç district and killing 34, injuring over 100.