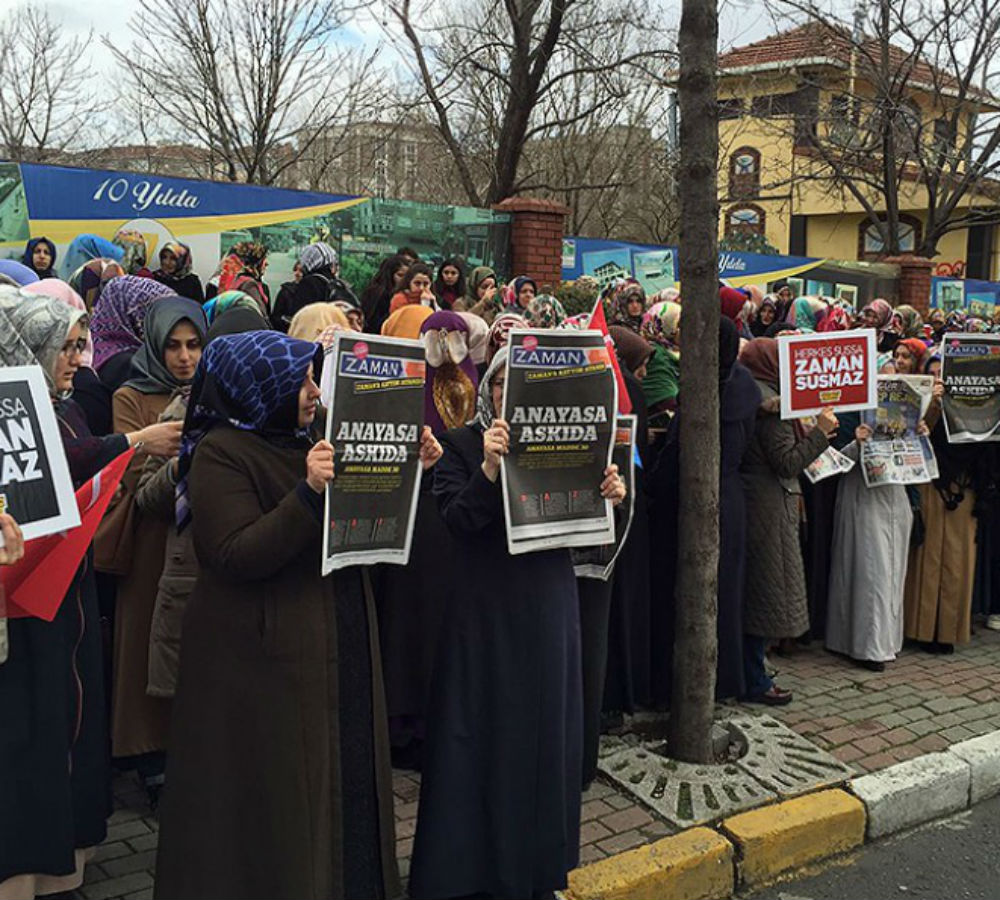 International voices have denounced a Turkish court decision to appoint trustees to take over the management of Zaman newspaper, saying it is latest move of the government to eradicate opposition to silence critical media.

Freedom House blasted the court decision to seize Zaman, calling on the Turkish government to stop the crackdown on the press.

“The appointment of trustees to run Zaman amounts to a government takeover of a private media outlet, and is a flagrant violation of both rule of law and freedom of the press,” said Daniel Calingaert, executive vice president. “The European Union and the United States, as Turkey’s partners and allies, should not trade Turkey’s support on migration and Syria for silence over the dismantling of democratic institutions.”

“A free and independent media, together with the rule of law and independent judiciary, are the cornerstones of internationally guaranteed freedoms which are the right of everyone in Turkey,” he added.

The United Kingdom’s National Union of Journalists (NUJ) has issued a message of solidarity with Zaman after the İstanbul court appointed a government board of trustees to take over the management of the daily newspaper on Friday.

“We are deeply concerned about the increased pressure being put on independent journalism either through the use of terrorism laws against journalists, the abuse of pre-trial detention by the authorities or attacks on media companies themselves to put them out of business. This has also led to a climate of fear and self-censorship among some journalists,” the NUJ statement ran.

Amnesty International’s Andrew Garder tweeted, “After attacks on the Constitutional Court, the removal of the İMC TV channel, rumors of an imminent takeover of Zaman newspaper are chilling. A new red line?”

IPI Director of Advocacy and Communications Steven M. Ellis said the latest reports were “extremely troubling” and he called on representatives of foreign governments to firmly condemn the Turkish government’s efforts to silence its critics.

“Turkey’s government appears to be willing to stop at no end to muzzle those who dare to criticise the policies of the president and the ruling AKP, much less those who point out alleged wrongdoing,” he said. “We urge diplomats and representatives of the international media to remind the Turkish government that a system where media outlets are prevented from giving citizens the information they need to hold their government accountable can hardly be called a functioning ‘democracy’.”

World Association of Newspapers and News Publishers (WAN-IFRA) Director Andrew Heslop denounced the government move. “We stand in solidarity with our friends and colleagues at Zaman in categorically denouncing this latest assault on press freedom in Turkey. The appointment of trustees to run the media company is an outrageous step and one that further undermines the Turkish people’s ability to access alternative sources of news and information. Distressingly, the practise of influencing the direction of a media company is becoming a favoured tactic of the Turkish authorities, one that flies in the face of internationally agreed standards for the freedom of the press and that severely erodes Turkey’s democratic credentials.”

“The European Union cannot remain silent to the political seizure of Zaman newspaper, Today’s Zaman daily and Cihan news agency. The appointment of trustees by the judicial system was actually foreseen to save dying private companies and cannot be used to silence critical media outlets or to attack social rights of media workers”, said the EFJ. The EFJ/IFJ will report this case to the Council of Europe’s platform for the protection and safety of journalists and to the Mapping Media Freedom platform as a new example of media freedom violation in Turkey. The Deutsche Journalisten-Verband (DJV, EFJ’s affiliate in Germany) has also strongly critised the never ending “climate of harassment, intimidation and persecution of critical journalists in Turkey”.

“I deplore the information reported by Turkish media and the Anadolu Agency that an Istanbul court took the decision to entrust to court-appointed trustees the control of the media group to which the newspapers Zaman and Today’s Zaman belong.

Considering what happened after a similar appointment of trustees to the Koza Ipek media group, I see this as an extremely serious interference with media freedom which should have no place in a democratic society. It is the latest in a string of unacceptable and undue restrictions of media freedom in Turkey, and it reinforces an extremely worrying pattern of judicial harassment against dissenting media and journalists in the country.

The Commissioner’s visit to Turkey is planned from 6 to 14 April.
OSCE calls on Turkey to refrain from acts of intimidation against media

Dunja Mijatović, OSCE Representative on Freedom of the Media, said appointing trustees to manage the Zaman daily newspaper is the latest in a string of measures initiated by the authorities to intimidate media in Turkey.

“Today’s decision of the authorities to appoint trustees to Zaman newspaper is deeply worrying,” Mijatović said. “This move not only further threatens media pluralism in the country, but also intimidates critical voices.”

“It is the responsibility of the authorities to ensure a vibrant and pluralistic media landscape,” Mijatović said. “This must be extended to media outlets whose editorial policies the authorities disagree with.”

The representative recalled the appointment of trustees to the media outlets, Bugün TV and Kanaltürk in October last year. Both media outlets, known for their critical editorial policies, went bankrupt earlier this week.

“I call on the Turkish authorities to urgently engage in efforts to reverse this negative trend. The constitutionally protected freedom of expression in the country must be guaranteed,” Mijatović said.

The English PEN, London branch of the worldwide association of writers, said Zaman’s seizure is not just an attack on the press, it is an assault on civil society. “This is a new low in the Turkish government’s campaign to silence the opposition and chill freedom of expression,” Jo Glanville, the director of the association said.

“Turkey is abandoning democratic values and it is essential for the #UK and the #EU to speak out,” the director was quoted as saying by the association’s Twitter account.

Leading press advocacy group Reporters Without Borders (RSF) said Erdoğan is behind the seizure of Zaman.

“The Turkish presidential office’s interference in the media has reached a new level,” Reporters Without Borders secretary-general Christophe Deloire said. “It is absolutely illegitimate and intolerable that Erdoğan has used the judicial system to take control of a great newspaper in order to eliminate the Gülen community’s political base. “This ideological and unlawful operation shows how Erdoğan is now moving from authoritarianism to all-out despotism. Not content with throwing journalists in prison for ‘supporting terrorism’ or having them sentenced to pay heavy fines for ‘insulting the ‘head of state,’ he is now going further by taking control of Turkey’s biggest opposition newspaper,” he added.

The Committee to Protect Journalists (CPJ) said in a statement on Friday that it is alarmed by the court ruling.

“Today’s move by the court paves the way to effectively strangle the remnants of critical journalism in Turkey,” said CPJ Executive Director Joel Simon. “Zaman and Today’s Zaman play an essential and critical role in informing Turkish society and the world. Rather than taking aggressive action to undermine the newspapers, Turkish authorities should be fulfilling their constitutional obligation to defend press freedom and rights of the journalists.”